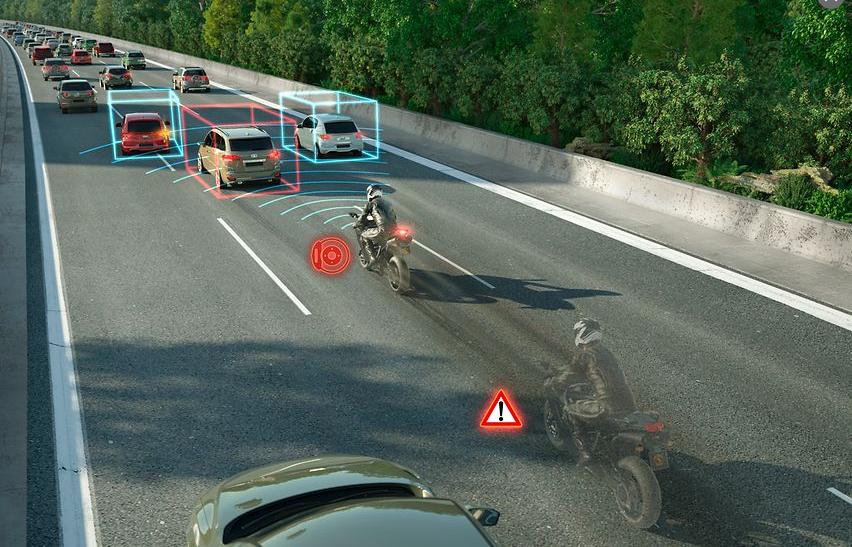 Continental is launching an emergency brake assist system for motorcycles. The radar-based system belongs to the range of advanced rider assistance systems that Continental will be presenting at EICMA in Milan, Italy.

The new fifth-generation radar sensors from Continental, which feature capabilities such as enhanced object detection, make it possible to deliver a high-performance emergency brake assist system.

Whereas an emergency brake assist in a passenger car automatically performs emergency braking with maximum braking force when a collision is imminent, the motorcycle system brakes in a much more measured way.

It is designed to help the rider, rather than to take control itself. According to Continental accident research, a large number of rear-end collisions could be prevented with an emergency brake assist – even in the case of intersecting and oncoming traffic – in the not too distant future.

“Unlike in cars, motorcyclists are very much exposed to environmental factors such as the wind, weather and vibrations, and this makes riding a very challenging task,” says Christian Pfeiffer, ARASTM project manager for the area of 2-Wheelers and Powersports at Continental.

“As a result, motorcyclists more frequently find themselves in situations in which it is difficult to estimate the speeds of other road users.

“Emergency brake assist for motorcycles is therefore primarily indicative in nature. It draws the rider’s attention to critical situations and makes them more readily understandable,” he adds.

“As is the case with cars, the system reduces speed here as well. However, the goal is to initiate a process that the rider can then take control of. This shortens the response time, which in turn can reduce stopping distance considerably.”

Emergency brake assist uses a radar sensor to monitor the area in front of the motorcycle. If there is a risk of a collision with a vehicle in front or any other obstacle, the rider is alerted by a visual, audible or haptic warning, e.g. by means of vibrations in the handlebars.

Low initial braking pressure then helps the rider with the active braking operation. If the rider does not react to the warning, emergency brake assist automatically builds up braking force – as long as the rider has both hands on the handlebars.

The deceleration is much less pronounced than is usual in a passenger car emergency braking system.