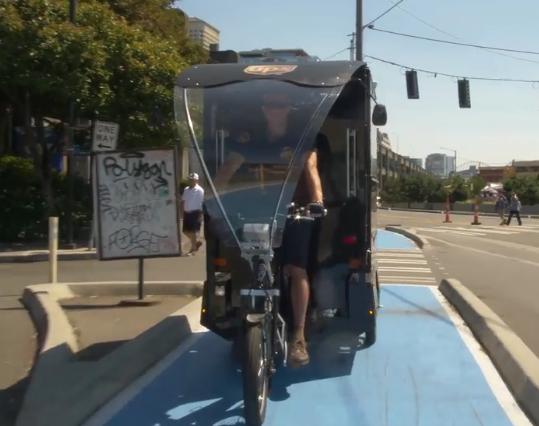 Developed in collaboration with Silver Eagle Manufacturing using Truck Trikes, the cargo eBike system will have removable cargo containers that are deployed via a specially designed trailer.

This “plug and play” design will provide greater flexibility to meet varying delivery needs, says the company. It will also be able to make deliveries to areas conventional delivery trucks can’t access directly and currently require that trucks be parked on the periphery for long periods of time.

This will reduce congestion in these areas by reducing truck dwell time, instances of double parking and other unintended consequences associated with downtown deliveries.

UPS partnered with the Seattle Department of Transportation to develop plans for the new pilot program. If successful, UPS will expand the route and consider additional cargo eBike deliveries in other areas of the city.

This is the first tailored urban delivery solution to address growing traffic congestion in Seattle’s downtown corridor, and is part of UPS’s Cycle Logistics Solutions that help reduce carbon emissions, noise, and traffic.

The UPS® cargo eBike is equipped with a battery-powered electric motor that can travel longer distances than traditional bikes, carry substantial loads and navigate hills and other terrain.

The modular, detachable boxes on the trailer can hold up to 400 lbs. and have a 95 cubic foot capacity. The bikes can be operated with human pedal power or battery power, providing drivers with the flexibility they need to navigate changing terrain and energy efficiency.

UPS and the University of Washington Urban Freight Lab will evaluate the cargo eBike’s reliability, design and integration into Seattle’s infrastructure over the next year.

The Urban Freight Lab is an initiative that brings together transportation engineers and urban planners who manage public spaces with retailers, freight carriers and technology companies supporting transportation solutions.

UPS will share data and analyses from the pilot for assessment against two of the lab’s key objectives: improving first delivery attempts and reducing “dwell time,” both of which should reduce traffic congestion and pollution.

The success of the UPS eBike was first demonstrated in 2012 in Hamburg, Germany, and serves as a prototype for the company’s newest cargo eBike in Seattle.

The company also operates inner-city delivery projects with delivery on foot and by bike in more than 30 major cities worldwide, including Leuven and Mechelen, Belgium; Paris and Toulouse, France; Frankfurt, Hamburg, Herne, Offenbach, Oldenburg and Munich, Germany; Dublin, Ireland; Rome and Verona, Italy; and London, U.K. in addition to the one other eBike previously operating in the United States in Pittsburgh.