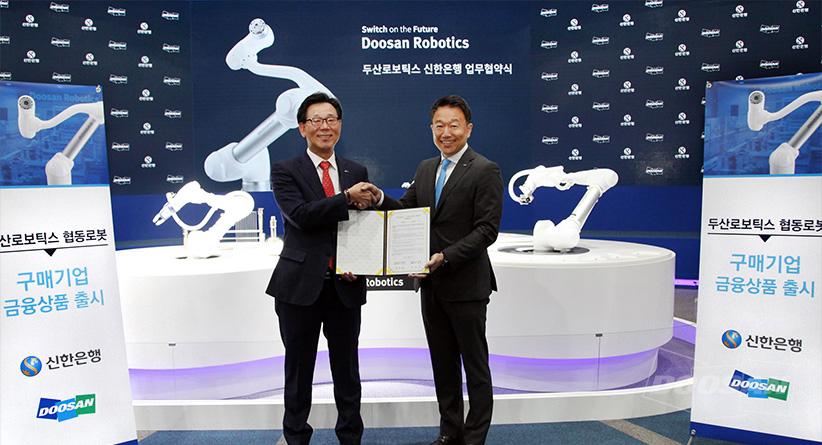 Doosan Robotics has signed a business agreement to develop and provide exclusive loans and other financial products for Shinhan Bank and Doosan Robotics collaborative robot buyers and to promote joint marketing.

This is the first time in Korea to make a loan product for the purchase of cooperative robots in the domestic financial sector.

Purchasing a Doosan Robotics collaborative robot using a loan product provided by Shinhan Bank can reduce the initial investment burden by allowing a repayment of three to five years after the suspension of a year.

The financial products introduced are expected to help Doosan’s cooperative robots spread and expand by improving the purchasing conditions of major demand-side small and medium-sized manufacturers.

In addition, the two companies will co-marketing Doosan Robotics collaborative robot, which is expected to lead to a diverse range of marketing strategies that harmonize robots and finance.

The signing ceremony was held at the “2018 RoboWorld” exhibition in Kintex, which took place recently in Goyang, Gyeonggi-do.

Prior to this, Doosan Robotics participated in AutoMatica 2018, held in Munich, Germany in June and provided various solutions for cooperative robots.

At that time, more than 100 companies from 34 countries including Germany, Italy and China announced immediate dealership and purchase intentions.

As a result of this, Doosan Robotics has concluded sales contracts with dealers in major European countries and has achieved success in expanding overseas sales.

An official from Doosan Robotics, says: “Doosan’s cooperative robots are well received by customers in spite of being in the early stage of market entry, and it is expected to take a leading position in the domestic cooperative robot market this year.

“We will continue to pursue overseas markets, such as securing an additional company.”