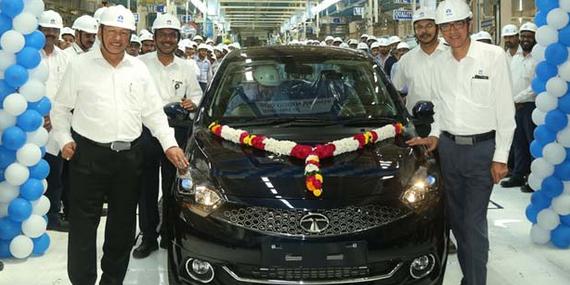 Operating at 100% capacity, Tata Motors has rolled out its 500,000th passenger vehicle from its Sanand factory located outside Ahmedabad, Gujarat, India.

The Sanand facility plays a vital role in the company’s passenger vehicles portfolio, manufacturing the widely popular models – Tiago and Tigor; the latter was recently launched in an all-new avatar.

Keeping up with the Government of India’s vision to bring Electric Vehicles in India, the Sanand plant produced the first electric passenger vehicle for commercial use in the form of Tigor EV and continues to support deliveries of the Government-operated Energy Efficiency Services Ltd. (EESL) order.

Spread over 1100 acres of land, the Tata Motors’ Sanand plant has played an important role in the development of the automobile industry in the state of Gujarat.

From a single model plant in 2010, the plant today has emerged as a multi-model facility, becoming one of the most technologically advanced plants.