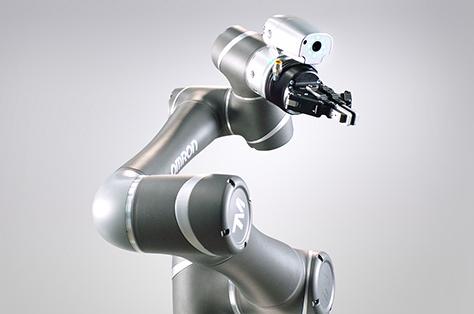 Omron has announced the global launch of the TM series collaborative robot family in 40 countries in order to “realize an innovative manufacturing environment where humans and machines work in harmony”, says the company.

In addition, as labor shortage become more “real” manufacturers are striving to automate the simpler and monotonous tasks, making it increasingly necessary to create a workplace where people can contribute with more creative tasks.

Omron’s TM series provides a unique solution to easily install a robot to automate applications such as picking, packing, and screwdriving which, although traditionally performed by humans, can be challenging to easily automate.

As part of the TM series launch, Omron will release a “mobile-compatible” model which will seamlessly integrate into the market leading LD series autonomous mobile robot.

By integrating the mobile-ready TM series with the LD series, users can take automate more complex tasks such as pick and place onto a tray / into a container and flexibly automate by connecting processes with autonomous mobile robots.

The TM series comes with built-in vision and integrated lighting, allowing the user to capture products with a wide viewing angle.

Equipped with image sensing functions such as pattern matching, bar code reading, and color identification, this robot system makes inspection, measurement and sorting applications extremely easy to set up out of the box.

The TM series conforms with all safety standards that enable cooperation between humans and machines and can be safely operated around people without industrial safety fencing traditionally required for industrial robots, greatly reducing the installation time.