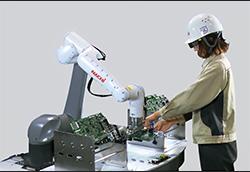 Nachi-Fujikoshi has launched the CZ10, a compact collaborative robot offering improved safety and operability. The company says the robot “will satisfy automation needs across a wide range of fields, including customers who have been unfamiliar with robots to date”.

The firm made its full-scale entry into the compact robot market in 2013. In the time since, it has continued to expand and update its lineup, amassed expertise in the utilization of compact robots and worked on the development, improvement and functional enhancement of collaborative robots.

The CZ10 is claimed to feature exceptional safety performance, with a safety design that meets the ISO10218-1 and TS15066 international safety standards, making it possible for a person to work side-by-side with the robot without the need for a safety barrier.

In functional terms, the robot detects contact with a person and shuts down or moves away in response. In terms of design, the robot is designed to maintain a certain distance between its arms and other components to avoid a person’s finger or other body part getting caught between moving parts.

Until now, areas such as food, pharmaceuticals and cosmetics and the assembly of components have been handled with production lines of people working in close proximity. As CZ10 robots can be introduced without requiring major production line design changes, automation can be achieved in a flexible and speedy way.

The CZ10 is equipped with linear motion and a new direct teaching feature that enables teaching with the hands maintaining a given orientation. Additionally, by adopting the same design as conventional industrial robots where the wrist and pivot are arranged along the same straight line, the company has pursued operability that will appeal to a wide range of customers regardless of their experience controlling robots.

In the areas of electric machinery and electronics, with their short product lifecycles, production lines undergo frequent changes. By enabling fast programming such as direct teaching and simple setup, even these industries are able to shorten line start-up times and improve production efficiency.

Sensors are equipped not only in the motor but in the reducer to achieve high-precision positional control. Accordingly, precise tasks previously performed by experienced workers are also supported.