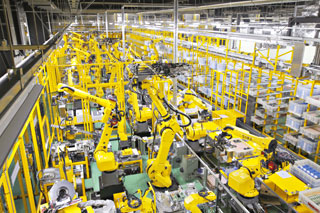 The ongoing trade dispute between China and the US has caused three of the world’s largest industrial robot makers to lower their earnings forecasts, according to a report on Nikkei.

Yaskawa, Kuka, and Fanuc have all “downgraded their full-year earnings forecasts”, reports Nikkei.

Fanuc predicts net profit of $1.26 billion for the year ending March 2019, which is approximately $26 million lower than its previous forecast.

Kuka, which was acquired by Chinese household appliances manufacturing giant Midea, said in its quarterly report yesterday: “Uncertainties exist primarily on account of the current developments in the global economy and in particular the trade dispute between the USA and China.

“This also affects the world’s largest robotics markets, such as the automotive and electronics industries, where we shall continue to keep a close eye on developments.

“For these reasons, and based on the current economic environment and business development, Kuka expects to generate sales revenues of around €3.3 billion in the 2018 fiscal year.

“This is below the forecast of more than €3.5 billion that was made at the start of the year.”

Yaskawa’s corporate executive vice president, Shuji Murakami, is reported to have said Chinese manufacturing companies – which are currently the biggest buyers of industrial robots – are “taking a wait-and-see approach to capital expenditure due to US-China trade tensions”.

The US-China trade war is also affecting other sectors of the robotics and automation industry, with Japanese machine tool manufacturers and automotive parts suppliers also reporting downturns in orders from China.