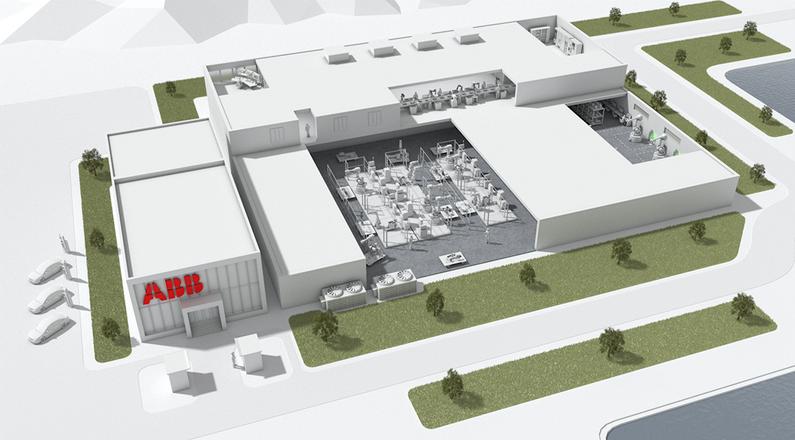 ABB has announced a major, new $150 million investment in Shanghai, China, to build what it calls “the world’s most advanced, automated and flexible robotics factory – a cutting-edge centre where robots make robots, says the company”.

The new Kangqiao manufacturing centre, near ABB’s China robotics campus, will combine the company’s connected digital technologies, including ABB Ability solutions, collaborative robotics and artificial intelligence research to create an environmentally sustainable “factory of the future.” It is expected to begin operating by the end of 2020.

Today’s announcement marks a significant milestone for ABB as China’s #1 robotics manufacturer as well as a critical global growth investment for the company in the world’s largest robotics market.

Today, ABB employs approximately 5,000 people in Shanghai, and the company’s robotics businesses in China employ more than 2,000 engineers, technology experts and operational leaders in 20 locations across the country. ABB has invested more than $2.4 billion in China since 1992, with over 18,000 employees in total.

ABB and the Shanghai municipal government today also signed a comprehensive strategic cooperation agreement focused on supporting industry, energy, transport and infrastructure in the region, and to support the “Made in Shanghai” manufacturing initiative.

“China’s commitment to transform its manufacturing is a torchlight for the rest of the world,” said Spiesshofer.

“Its strategic embrace of the latest technologies for artificial intelligence, advanced robotics and cloud-based computing present a playbook for every country that wishes to have a globally competitive manufacturing base.

“Shanghai has become a vital centre for advanced technology leadership – for ABB and the world. We look forward to working with Shanghai Mayor Ying Yong, other community leaders and our customers as we launch this major expansion of ABB’s substantial presence in China, building on our journey to become China’s leading Robotics manufacturer that started in Shanghai over two decades ago.”

The new Shanghai factory will feature a number of machine learning, digital and collaborative solutions to make it the most advanced, automated and flexible factory in the robotics industry, says the company, and an onsite R&D centre will help accelerate innovations in artificial intelligence.

Using a new, global design approach that ABB announced earlier this year, the factory will be able to dramatically increase both the breadth (type of robots) and depth (variants of each type) of robots that can be made onsite, allowing greater and faster customisation to meet the needs of customers.

ABB will also be able to combine this expanded portfolio of robotics into an almost limitless number of tailored solutions.

“The concept behind this factory is the same advice we give our customers every day: invest in automation solutions that provide flexibility and agility to grow in whichever direction the market goes,” said Sami Atiya, President of ABB’s Robotics and Motion division.

The entire Shanghai factory will be modelled as a digital twin, which will provide intuitively tailored dashboards for management, engineers, operators and maintenance experts to make the best decisions.

This includes gathering and analysing intelligence through ABB Ability™ Connected Services on the health and performance of ABB robots in the factory to ensure early identification of potential anomalies.

In addition to avoiding downtime, ABB Ability offers advanced digital solutions that can improve performance, reliability and energy usage, as well as providing access to the world’s best platforms, such as the Microsoft Azure enterprise cloud, which is the first international public cloud service operated in China.