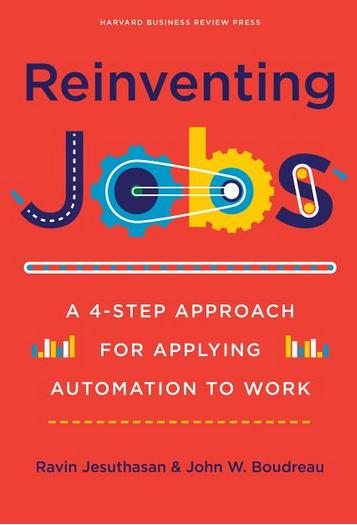 Reinventing Jobs argues that the proliferation of AI and automation options calls for a re-examination of the traditional notion of a “job”, yet dispels the claim that humans will be replaced by machines.

Supported by primary research, Jesuthasan and Boudreau show how leaders can optimise human-machine combinations to redefine jobs and work.

The four-step framework is a hands-on guide to solving the challenge of integrating automation into an organization:

Deconstruct jobs into component work tasks – so that tasks can be sorted in terms of their automation compatibility.

Assess the relationship between performance and strategic value – for each task, identify this relationship to clarify what you are solving and the optimum payoff to work automation.

Achieve the optimal combination of human and machine labour – determine where automation will replace, augment or create new work for humans.

“Organisations are falling short as they chase the latest and greatest in automation because they don’t fully understand how it will affect work and the company,” says Jesuthasan.

“Our framework will help leaders responsibly apply automation to achieve a sustainable combination of humans and machines.”

The optimising of work automation will redefine the nature of an organisation. Reinventing Jobs goes on to examine how leaders must evolve to fit new organisational structures and drive the necessary transformation.

Julie Gebauer, Global Head of Human Capital and Benefits at Willis Towers Watson, adds: “People strategies that reflect the nuances of how work gets done are more likely to realise the benefits of automation alongside an engaged and empowered workforce.

“Leaders who involve employees in how work gets done in the future are most likely to land on the optimal mix of robotics, AI and people.”