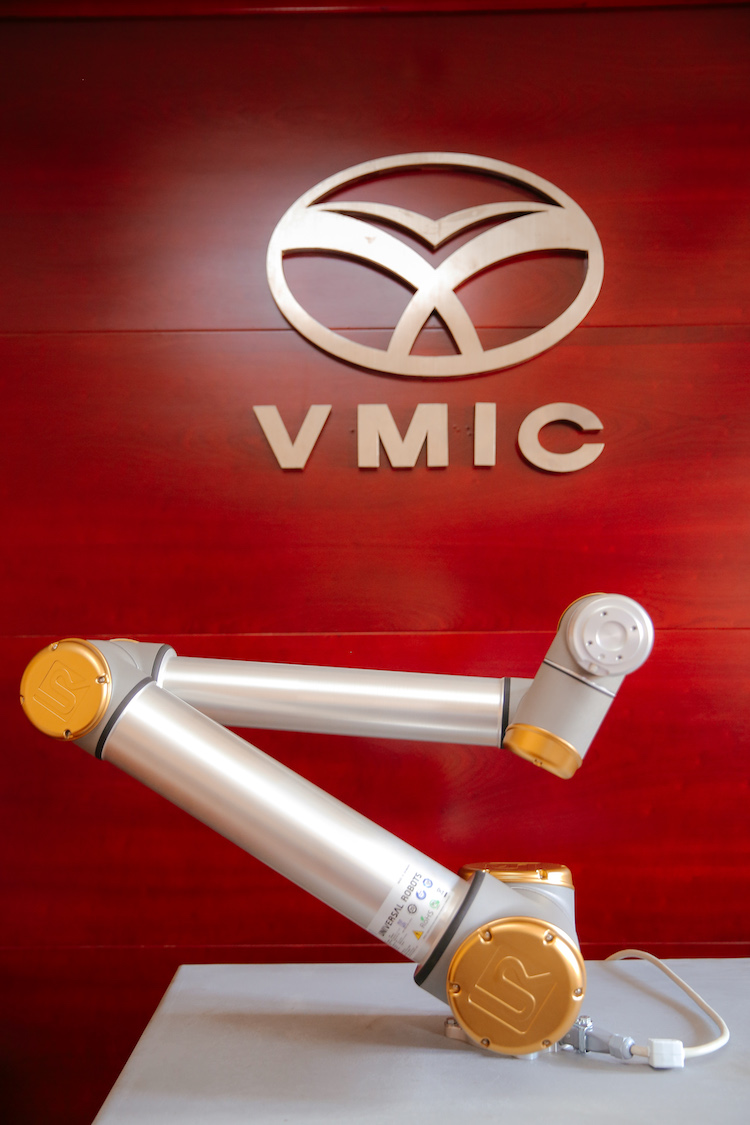 Universal Robots has awarded one of its special Gold Edition robots to a selected Southeast Asia partner.

Vietnam’s Vinacomin Motor Industry Joint Stock Company was presented with the rare UR10 special edition collaborative robot, or cobot, which has joints painted in a rich, gold-coloured finish.

Universal Robots machines are always blue and grey. The company recently reached the milestone of 25,000 unit sales, and has been marking the achievement with the awarding of the Gold Robots to selected partners around the world.

The company awarded 10 of its 25,000 global customers a Gold Edition cobot. The lucky winner in Southeast Asia is Vinacomin Motor.

Based in Vietnam’s Quang Ninh province, VMIC is engaged in the manufacture, assembly, maintenance and repair of transportation vehicles.

The company’s main products are heavy duty trucks used in the delivery of mining products, together with light trucks and other utility vehicles.

Other business activities include the production of automotive parts, industrial machinery and equipment trading, the construction of industrial and civil infrastructure, as well as the provision of technical consulting services.

Pham Xuan Phi, VMIC chairman and CEO, says: “We are thrilled to receive the Gold Edition UR10 cobot which will be deployed to assist in the production of parts for transport vehicles, working alongside our employees.

“The need to improve productivity and reduce operational cost led us to opt for cobots as the ideal solution.

“Since deploying our first cobot in July this year, we have already seen productivity surge 30 per cent and improvements in product quality and time stability.”

“With this, we celebrate not just the success of UR in empowering customers, but also the successes of our customers in innovating and changing their workplace with cobots.

“The Gold Edition cobot reflects our continued commitment towards making the unlimited potential of robotics accessible for all.”

Vietnam has identified robotics as one of the pillars of Industry 4.0 as automation becomes integral for businesses to remain competitive.

However, 82 per cent of Vietnamese businesses have yet to take steps to prepare for Industry 4.0 while just 10 per cent are ready.

Furthermore, a report by the Ministry of Industry and Trade showed that interest among enterprises to invest and apply new technologies was still modest.

Acknowledging this, the government has been aggressively focusing on developing initiatives and legislation to speed progress in the era.

Among the efforts are the 2011 – 2020 Strategy for Science and Technology Development to enhance economic competitiveness and speed up industrialisation, prioritising the importance of industrial robots and hi-tech automation.

The government has also identified other measures including collaborations between technology enterprises and science and technology organisations to consult and support local firms as appropriate steps to ensure the successful acceptance of robotic opportunities.

The Vietnamese economy is one of the fastest growing in the world. The country recorded a 6.8 per cent increase in GDP last year on the back of a humming manufacturing sector.

Cobots are now the fastest-growing segment of industrial automation, expected to jump tenfold to 34 per cent of all industrial robot sales by 2025, according to the International Federation of Robotics.

The automotive and electronics industries are big users of cobots globally.

Electronics is the second largest cobot integrator, accounting for 18 per cent of global demand in 2015.

By 2021, electronics is forecast to invest approximately USD 480 million (11 trillion dong) in cobots.

Since the sale of the first cobot in December 2008, UR cobots have been utilised in various industries ranging from food production to scientific research, taking on tasks that include industrial assembly, pick and place and even quality inspections.

Today, Universal Robots is the unrivaled cobot market leader with a 60 per cent global share, selling more cobots than all other robot makers combined.

Unlike conventional robotic solutions, Universal Robots’ cobots are designed to work hand-in-hand with operators with maximum efficiency, opening up more opportunities for human-robot collaboration in the workplace.

These highly versatile cobots can take on a wide spectrum of tasks and have the fastest payback time in the industry, making them a viable option for small-scale businesses where conventional options may be too expensive.