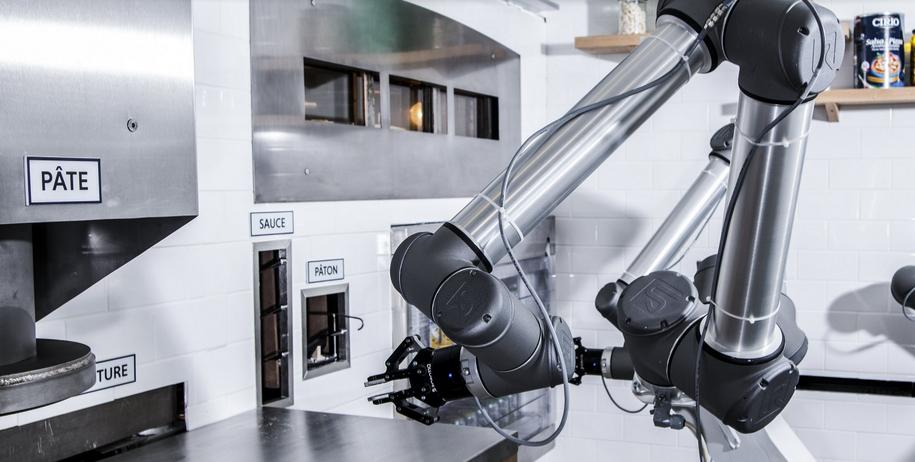 Universal Robots has been chosen by the French start-up EKIM to design its pizzaiolo robot: PAZZI. Created using Universal Robots’ UR10 and UR5 arms, PAZZI is capable of preparing up to 10 pizzas simultaneously from nearly five million recipe combinations, 24 hours a day, seven days a week.

PAZZI, marketed by EKIM, is a turnkey “tech good food” concept, providing quality pizza based on healthy and natural ingredients, 100% autonomous, from order to delivery.

Sysaxes, one of Universal Robots’ distributors in France, has supported EKIM from the project’s outset by supplying the complete cobot application including grippers and accessories certified to work  with Universal Robots cobots.

Jacob Pascual-Pape, Regional Sales Director for EMEA at Universal Robots, said: “Together with our distributor, we have been supporting EKIM on the project since 2013.

“The main difficulty experienced, during the design of this culinary spectacle, was the harsh conditions to which the robots were exposed in such a restricted environment.”

PAZZI is equipped with three robot arms which are visible to the public, two UR10 and one UR5 all working in tandem. They cut and flatten the dough, place the selected ingredients, bake, cut, and package the pizzas.

Alongside the EKIM team and chef Thierry Graffagnino, a three-time world pizza champion, the cobots learned to replicate the movements of a pizza chef, creating unique pizzas by placing ingredients randomly.

To handle the ingredients needed to create the pizzas, the robots are equipped with Robotiq 2-finger adaptive robot grippers, designed for collaborative robots and certified by Universal Robots+, Universal Robots’ application ecosystem.

“We chose Universal Robots because they were the only robots on the market that were sufficiently light, precise and aesthetic, while having a large range and a payload adapted to our needs,” explains Cyrill Hamon, EKIM’s Deputy Managing Director in charge of automated systems.

The EKIM project is very close to the initial idea that motivated Universal Robots’ co-founder: “Universal Robots was originally launched after researching the Danish food industry. So, we tried to arrange pepperoni on pizzas with a traditional industrial robot,” said Esben Østergaard, CTO and co-founder of Universal Robots.

“We quickly noticed that the robot was too big and clumsy to meet the needs of food companies. This is how the idea of Universal Robots and cobots was born.”

A total of more than 5,000 hours and 6,000 components were needed to design the systems that make up the autonomous pizza restaurant.

The EKIM aims to launch a new turnkey concept of franchised or licensed catering in 2019 after a pilot which should be launched in France by early 2019 under the name PAZZI.