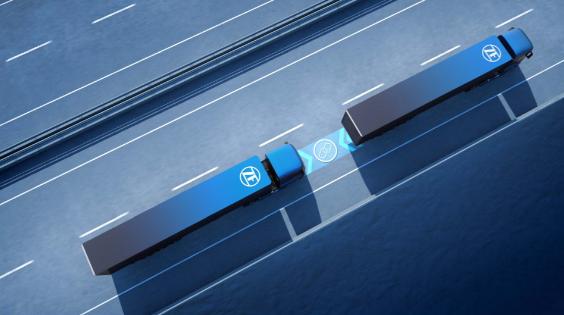 ZF is working with truck manufacturers as part of the EU co-funded ENSEMBLE project to test programmes with the goal of introducing multi-brand truck platooning on European roads by 2021.

ZF’s current portfolio has the technology to enable platooning capabilities, including camera and radar sensors, the ZF ProAI supercomputer, the ReAx electrohydraulic commercial vehicle steering system as well as the transmission system.

“We are already providing truck manufacturers with networking support that is making transport more efficient and positively impacting the total cost of ownership.”

A platoon, where two or more trucks drive closely together, reduces the aerodynamic drag for the trucks behind the lead truck, which, in turn, can reduce fuel consumption by up to 20 percent.

The reduced distance between trucks in a convoy is possible because the networked vehicles can function without driver reaction times.

The trucks are designed to brake and steer in virtually real time with the actions of the lead truck; however, they do not drive blind.

Thanks to sensor information and autonomous driving functions, they can also stay in the lane even if the lead vehicle unintentionally goes over the lane markings.

Multi-brand refers to convoys made up of trucks from different manufacturers. Such mixed convoys are likely to become the most frequent scenario.

In another project, aFAS, which is sponsored by the German Federal Ministry for Economic Affairs, ZF has worked on implementing the platooning concept in security vehicles that are part of moving roadworks projects.

ZF is currently testing platooning in Europe, but also has plans to advance the concept in North America in the coming years.