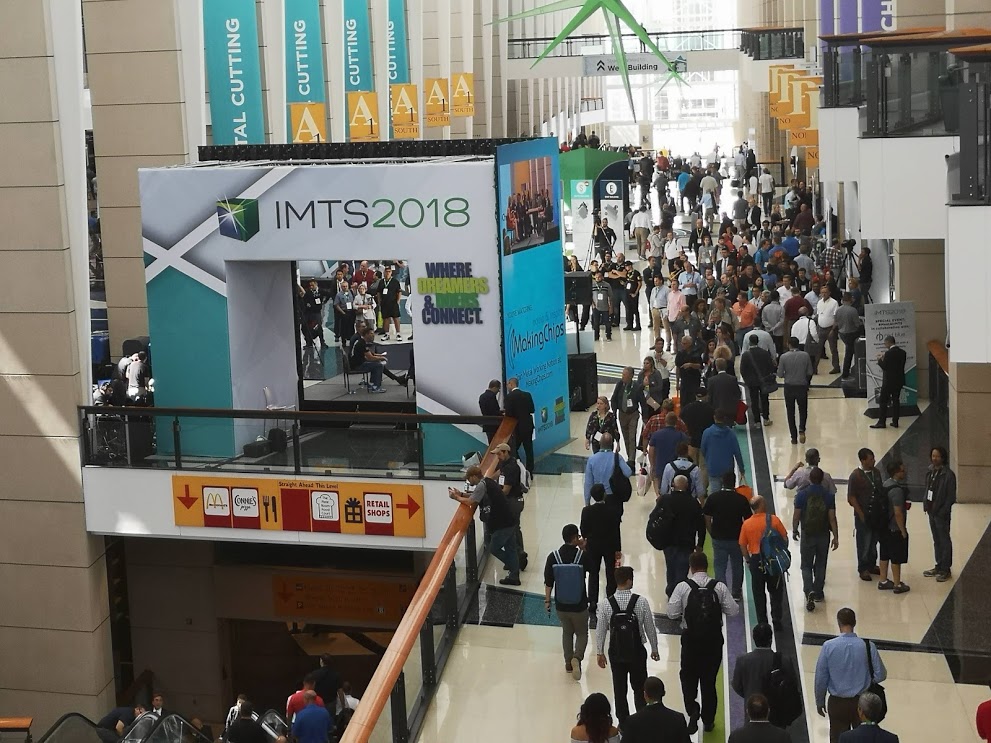 “Connectivity, the digital transformation of manufacturing, automation, additive manufacturing and a strong economy drove record numbers at IMTS 2018,” says Peter Eelman, Vice President – Exhibitions & Business Development at AMT – the Association For Manufacturing Technology, which owns and produces IMTS. “Digitization collided with a robust manufacturing industry to create our most dynamic show ever.”

Notable growth areas at IMTS 2018 included an expanded Additive Manufacturing Pavilion that featured 51 exhibitors and covered 31,550 sq. ft., the strong partnership with HANNOVER MESSE USA and its four co-located shows and 510 exhibitors, an expanded Smartforce Student Summit that drew 7,000 more visitors than in 2016.

As an example, he points to the venture between 3D Systems and GF Machining, with their DMP Factory 500 metal 3D printing system unveiled to the public on the first day of the show.

Scott Harms, founder and President of MetalQuest Unlimited, has attended IMTS since 1996. After three days at this show, he was working on quotes for a load/unload robot, a shop floor CMM with an automation package, scheduling software and smart factory technology. He is also looking at cobots.

“There are so many ways of adapting automation that can make our operation more efficient, and they’re all here at IMTS 2018,” says Harms, who brought 11 people to the show. “We spent more time at the show this year, and it’s still not enough. Technology is at an all-time high.”

Illinois Governor Bruce Rauner addressed the IMTS audience on Sept. 12, stating that “There are four reasons that manufacturers from around the world are coming to the state of Illinois to build great products….people, transportation, innovation and energy. We’re driving great manufacturing growth in this state.”

He noted that Illinois is the 17th largest manufacturing economy in the world, generates 600,000 manufacturing jobs, produces $100 billion dollars in manufactured products and creates the “most exciting and dynamic part of prosperity for everyone.”

“The machines that you see at IMTS 2018 are moving at the speed of digital technology. They’re able to take files and make something that you’ve imagined,” says LM Industries CEO and co-founder John B. Rogers, Jr.

“The tagline of IMTS 2018 says it the best, ‘Where dreamers and doers connect.’ That was the reason why we started a vehicle manufacturing company like Local Motors where we would be able to think it, print it and deploy it.”

At the national government level, the Department of Defense Industrial Base Analysis and Sustainment (IBAS) held advanced manufacturing meetings and workshops at IMTS 2018 in order to continue the dialogue of ensuring U.S. industrial strength and readiness regarding technology, workforce, and furthering public-private collaborations. The IBAS team engaged more than 26 companies, with more than a dozen participating in the follow-on workshop.

The Hannover Messe USA co-located show hosted 510 exhibitors from around the world. At the center of Hannover Messe USA was the Solutions Theater, which hosted more than 60 learning sessions that dove deeply into important topics such as IIoT, intelligent manufacturing and next-generation technology.

Dell Technologies, Microsoft and SAP joined other innovators in a new Digital Factory exhibition that showcased breakthrough products and solutions focused on integrated processes and IT solutions for plant operations. The show has increased its exhibition space by 26 percent over IMTS 2016 and by more than 440 percent since its first appearance eight years ago.

“We want all visitors to be more competitive in this global world. People need to connect and collaborate,” says Dr. Jochen Koeckler, CEO of Deutsche Messe, Hannover Messe’s parent organization.

With digital technology, the pace of change makes it difficult to fully grasp the possibilities. IMTS 2018 directly addressed that issue with AMT’s Emerging Technology Center (ETC) on digital transformation, which featured demonstrations of how new science impacts manufacturing.

Cisco, an IT hardware company, exhibited at IMTS for the first time, bringing its expertise in the industrial security of data and connectivity to the ETC. Visitors learned about best practices to secure their plant floor and intellectual property. Security is now a top concern, and manufacturing facilities need to manage modern security with legacy operating systems.

IMTS 2018 will be noted as the year of digital transformation, as exemplified by an automated cell linking a Hurco CNC, a Universal Robot arm and Hexagon CMM using the MTConnectTM standard.

“MTConnect is the building block that enables intelligent systems and decision-making based on data rather than instinct,” says Eelman. “Instead of asking ‘What’s a connected system?’, visitors now say to exhibitors, ‘Your systems use MTConnect, right?’”

Paul Gray, Hurco’s R&D Manager, notes that the only required connection between machines is an Ethernet cable. “Simple connectivity and software communication overcomes a major hurdle for job shops that focus on high-mix, low-volume and even custom parts,” he says.

To show its speed and versatility, Oak Ridge National Laboratory created a “die-in a-day” demonstration that featured four stages of development: printing the die at Lincoln Electric, machining the printed die at Mazak, molding a part from the die at IACMI and 3D laser scanning the part at Quality Vision International.

“Traditionally it takes a minimum of six weeks to make molds, and it costs tens of thousands of dollars,” said Lonnie Love, Group Leader of Automation Robotics and Manufacturing at Oak Ridge National Laboratory. “We demonstrated every day of the show the ability to go from digital to actual production in less than 10 hours. This technology has practical uses that manufacturers can utilize now.”

This ETC also featured a “Knowledge Bar” hosted by America Makes where visitors learned about the development of education roadmaps, an online platform for members to exchange information and establishment of industry-wide additive manufacturing standards and specifications.

Multiple companies chose IMTS 2018 as their venue to debut high-volume AM systems, including HP and EOS. Stephen Nigro, President of 3D Printing, introduced the HP Metal Jet printer. Designed for high volume production, the HP Metal Jet is said to be 50 times more productive than any other binder jet or laser.

Perhaps more than any other technology at IMTS, AM represents the opportunity for small and start-up companies, from the US and abroad, to gain exposure to a large audience and grow their dreams.

“Every building in McCormick Place featured AM technology,” says Eelman. “Four years ago when we produced the Strati vehicle on the show floor, large-scale AM was a novelty. At IMTS 2018, AM technology was part of the manufacturing processes used to produce the entrance hall impact units.”

Athena, the industry’s first voice-operated assistant, debuted at IMTS in the Makino and OKK booths, as well as in AMT’s ETC where visitors could control a 5-axis DMG Mori CNC.

“With 5-axis milling technology becoming more prevalent, operators need to know more to be highly productive,” says Dan Bagley, VP Marketing & Sales at iTSpeeX. “People don’t operate machines. People produce parts in a cell, and the machine is an actor in that cell. ATHENA provides intelligent assistance to machinists to allow them to operate multiple types of controls.”

Index previewed its iXworld, an online portal with four distinct service areas under a single interface. Fanuc’s FIELD system, an open platform that collects machine data in real time, was connected to more than 300 machines from 144 companies at the show. SAP focused on how to use blockchain to improve trust and transparency from source to consumption.

After meeting at the previous show, Infor and Forcam collaborated to create a bi-direction interface between FORCAM’S plant floor information-gathering solution and Infor’s back-end ERP solution. Fraunhofer demonstrated the first 5G network in the world, which can record data at frequencies 10 to 100 times faster than LTE.

“Not automating is our biggest competitor,” notes Robby Komljenovic, CEO and Chairman of Acieta. He says that automating is easier than companies think, adding that, “You need to exploit technology” to remain competitive.

“The national conversation around STEM education has had a positive influence on our ability to attract more schools to the Student Summit,” said Greg Jones Vice President of Smartforce Development for AMT.

“Students engage with the people who are in those manufacturing jobs right now, as well as see the technology and equipment they would use on the job. Technology is making manufacturing careers cool again,” says Jones.

High school junior Kaitlyn Ludlam addressed the Student Summit as one of Top 24 Under 24 Leaders and Innovators in STEAM and Space, an annual awards program presented by The Mars Generation®.

“I’ve been doing a lot more with Steam, reaching out to other kids who are being told they can’t do things, especially young women” says Ludlam. “I want to help them understand that they can do these things and not to listen to people who discourage them.”

The Miles for Manufacturing 5K fun run and fundraising event on Wednesday, Sept. 12, drew a record 486 runners. The 5K run generated almost $28,000 in proceeds, which will be used to acquire a STEM kit called Bionics4Education from Pesto-Didactic and donated to 14 STEM middle schools in the Chicago area.

In total, more than 2,500 visitors attended conference sessions during the week of IMTS. The largest event, in terms of both content and visitors, was The IMTS Conference.

“The Additive Manufacturing Conference was a tremendous success and our largest event to date with more than 575 attendees,” adds Travis Egan, Publisher, Additive Manufacturing magazine. “This included both current and future adopters of AM technology looking to deepen their knowledge base and learn more about the latest technologies in order to grow their manufacturing businesses.”

Based on feedback from the job shop and contractor community, IMTS created a program to address the challenges they face to help diminish their daily struggles.

“Our new Job Shops program attracted 405 participants,” Michelle Edmonson, Senior Director – Exhibitions Operations & Marketing, AMT. “With such strong interest at this show, we plan to continue our focus on jobs shop at IMTS 2020.”

Presentations included a seminar on the unending search for qualified labor hosted by four job shop owners. “The part of the discussion on reaching out to high school-level and community college students was good. I hadn’t thought about going to those sources to find kids interested in manufacturing,” says Aaron Collier, General Manager of Liberty Bottleworks in Yakima, Washington.

EOS’ “Applied AM – Where Additive Minds Meet” half-day symposium drew more than 300 people. In a sign of how far AM has progressed, topics included a session on AM digital supply chain readiness.

“What I get at the show is the ability to meet people,” says Matt Guse, President of MRS Machining, who has attended IMTS since 1996. “You meet people just sitting around and talking. You share ideas, or they tell you what they’ve seen. Sometimes you think you’ve seen the whole show, and the next thing you know, someone tells you about something new in the next hall and you see how awesome it is. That’s why I always say IMTS is the Super Bowl of manufacturing.”

“We had very astute attendees coming to IMTS 2018,” says Eelman. “They are more educated about the health of their business and know that connectivity, digitization, automation and knowledge are part of the solution.

“IMTS takes all this, puts it under one roof and fosters connections. By the time we reach IMTS 2020, what visitors learned this week will have already changed their operations. People will come to renew old friendships and uncover new possibilities that expand their horizons.”