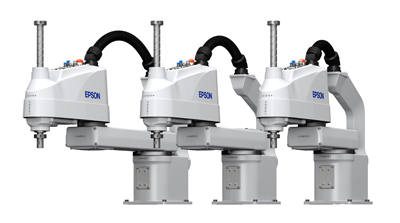 Epson Robots has launched a competition to win three of its industrial robots.

Epson, which says it’s the market leader in SCARA robots, has been a provider of automation solutions since 1980. It’s one of the top 10 robotics companies in the world.

The company says the competition is launched as the expansion of automation continues around the world, with many new and innovative applications for robots are being developed.

These robots are revolutionizing industry and other sectors, and have the potential to “radically improve the quality of our working lives”, says Epson.

The competition – win up to 3 robots

Epson is placing our latest technology in the hands of the future: universities, tertiary education establishments and research institutions across the EMEAR region –  Europe, Middle East, Africa, and Russia.

Epson says it has chosen education and research institutions to support the growth, development and competitiveness of industry and automation.

Applicants are invited to submit a proposal before 15th December 2018 for the opportunity to win up to three Epson robots to support their project.

Applications will be judged on a set of criteria including innovation, education, skills development, unique robot usage and sustainability.

Shortlisted applicants will be invited to present their application in front of a panel of judges.

Volker Spanier, head of robotics solutions, Epson Europe, says: “Skills and creativity are at the heart of innovation.

“As fast as robot manufacturers like Epson work to make automation more accessible, to fuel competitiveness and drive growth in an automated world, we also recognize the need to promote and support talent and skill development.

“Millennials, who make up 50 percent of the world’s population, will face a radically different working world to the one we know today.

“We know that young people have the potential, now we want to ensure they have the tools to implement it, by placing the technology of the future in their hands.”

The number of industrial robots deployed worldwide is expected to increase to around 2.6 million units by 2019 and continue to grow at an increasing rate.

Across Central and Eastern Europe especially, robot adoption is set to increase by up to 20 percent year-on-year over the next two years, the highest growth rate globally after China.

This growth places robotics as central components in the future of manufacturing, healthcare, and many other sectors.

But they also have the potential to play an increasingly vital role in providing tools for training, waste reduction, increased productivity, and lower energy consumption.

Epson is providing an opportunity for young people in EMEAR to imagine what that might look like.