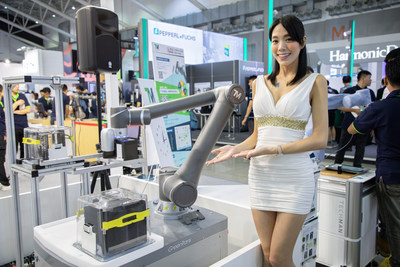 The company boasts that its Techman robot is “the most intelligent collaborative industrial robot in the world” and recently signed a partnership with industrial automation giant Omron.

Techman Robot has a built-in visual system and “innovative” user interface. The company says it has become one of the industrial robots with “the fastest sales growth in the global market”.

Ever since its establishment for two years, its sales covers several tens of countries in Europe and Asia and this year it is actively launching in US market.

IMTS is the largest machine tool show in the US and is the first stop for launching into the market for Techman Robot.

In this six-day show commencing from September 10, the TM5, TM12, MWS product series are displayed that provide solution plans for various industries.

Techman Robot with built-in intelligent vision is applicable to applications in various industries.

However, in order to satisfy more requirements of industries, this year Techman Robot introduces the brand-new high payload robot product TM12 and TM14.

The loadable capacity is larger than all the other collaborative robots in the market with similar arm length and the payload is as high as 12kg and 14kg and the working area is as wide as 1300mm and 1100mm.

The robots can be used to cope with highly functional mobile automated guided vehicles, and by combining the built-in visual system of TM Robot to execute positioning and identification, it can cover highly compatible and high flexible applications and these are the first choice for application in the semiconductor industry and logistics industry, says Techman.

The robot comes with mobile work car and through TM patented 3D Landmark function; TM5 can quickly interpret the displacement of station work desk and will recalibrate the point position.

Not only the robot can quickly replace high flexible deployment of the production operation line temporarily, it can also quickly replace the online operation of breakdown machine arm and can reduce subsequent maintenance cost.

In addition, the built-in intelligent visual function of TM5 does not require large jig and positioning mechanism as it can position precisely by visual positioning to engage in high-precision mission of screw locking.

The requirement of collaborative robot doubles

The International Federation of Robotics estimates that between 2018-2020, the global industrial automation market will grow 15 percent per year and requirement for collaborative robot is one of the cores of industrial revolution 4.0 and is the category that has the fastest growth.

Techman Robot is the first collaborative robot brand and manufacturer in Taiwan.

Ever since its establishment in 2016, its sales have been promoted to more than thirty countries in the world in just two years.

It has more than forty agents in overseas and is the second largest industrial collaborative robot brand in the world, claims Techman.

The smart, simple and safe characteristic of Techman Robot and its built-in visual system can reduce jig cost and the self-coordinate compensation positioning characteristic can comply with industry requirement of less quantity, diversification and rapid change of industry 4.0 and will be the utmost key advantage for various industries to realize the flexible automated unmanned factory.