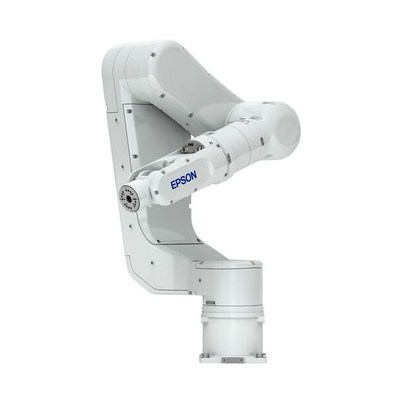 Epson Robots has expanded its Flexion N-Series of industrial robots with the new N6 6-axis robot.

The Flexion N6 is currently available from Epson.

Epson says the N6 has “a unique ability to fold under itself”, which helps reduce intermediate points and shorten cycle times.

The company adds that the compact robot is “deal for vertical load / unload applications”, while providing “the ultimate in motion and workspace efficiency”.

The N6 will also have 850mm reach and clean versions due to release late 2018.

The Flexion N2, the first robot to feature the unique folding arm design, was awarded the Edison Award for Innovation and UBM’s Golden Mousetrap award in 2017.

Gregg Brunnick, director of product management for Epson Robots, says: “Thanks to the unique folding arm technology, our N-Series robots are ideal for a wide range of industries that require extreme precision and dexterity for handling small parts in a very tight environment.

“By expanding the Flexion N-Series, we are meeting the demanding needs of advanced manufacturing for intelligent, compact solutions.”