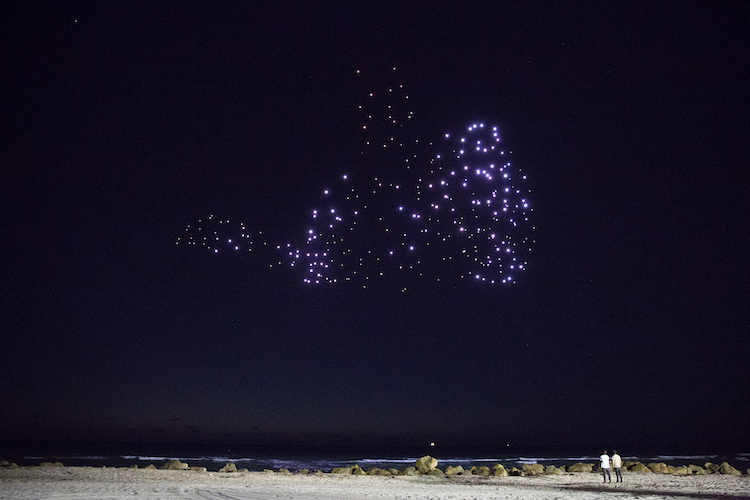 Studio Drift has presented “Franchise Freedom” for the first time in Europe, following a successful premiere at Art Basel in Miami Beach last year, developed in collaboration with BMW.

A flying sculpture of 300 luminous Intel Shooting Star drones in bird swarming formation will be on view for three days after sunset, from August 10-12, 2018.

Illuminating the river IJ in Amsterdam, the performative artwork is part of the retrospective “Studio Drift: Coded Nature”, on display at the Stedelijk Museum Amsterdam until August 26, 2018.

After the unprecedented number of visitors to the museum for the exhibition, the City of Amsterdam in collaboration with BMW, Intel, RAI, Rabobank, NDSM, and Studio Drift will offer the public the unique opportunity to view this autonomous performative artwork. It is the first time that such a large number of drones has been allowed to fly for an art display in the region.

The future of freedom

For ten years Lonneke Gordijn and Ralph Nauta from Studio Drift have been studying the flight patterns of starlings moving in a swarm.

Fascinated by the movements whereby freedom and at the same time limitations of the individual birds within the swarm alternate, the artists developed an algorithm that can make autonomous choices.

In this way they could eventually imitate these movements by translating them into software that was specially developed and embedded in the luminous drones.

The artists learned from nature that imitating the natural behaviour of a flock of birds results in a kind of harmony that works for many individuals at once.

For example, the decentralized management of a swarm or group can offer multiple solutions in our society such as self-driving cars or the regulation of groups of people in shared spaces such as train stations.

Lonneke Gordijn, of Studio Drift, says: “The swarm as an autonomous organism expresses freedom, while the individual birds have to adhere to strict rules in order not to fly against each other. The resulting image is a wonderful translation of how we live together as people and look for our own place inside or outside society.”

Ralph Nauta, also of Studio Drift, says: “By trying to understand and use nature instead of going against it, we can achieve much more in the field of technology. For example, human applications can provide improvements and not pollution.”

Franchise Freedom was developed in collaboration with BMW and is made possible with Intel Shooting Star Technology.

BMW says it has a 50-year global track record of recognizing and enabling talent in the arts.

The company makes artistic visions come true and honors the full creative freedom of any artist or institution they collaborate with, as this is as essential for producing groundbreaking artistic work as it is for major innovations in a successful business.

When Studio Drift sought a dialogue with BMW in regard to their ambitious project in 2017, the company, as long-term partner of Art Basel, could not pass on the challenge.

For the period of over half a year, discussions ensued between BMW and Studio Drift – just as they did with artists like Jeff Koons, Olafur Eliasson, and Cao Fei before them.