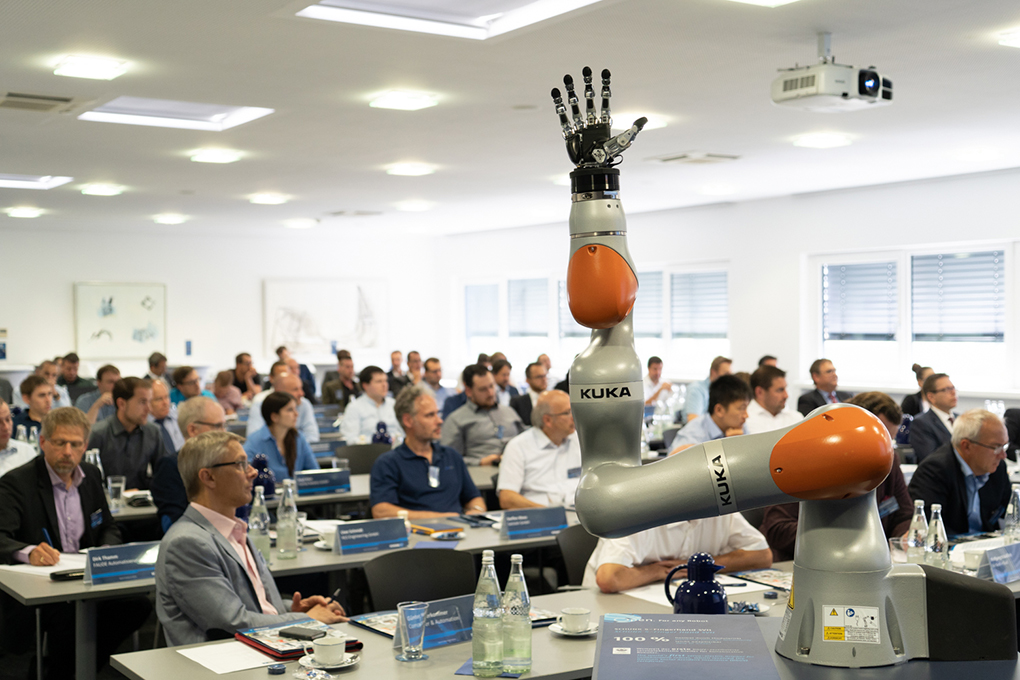 Schunk is one of the leading suppliers of components to industrial robotic arm manufacturers and other industrial machinery makers. The company held an open day recently in which it outlined its vision of human-robot collaboration, or collaborative robotics, which the company says combines human and robot strengths.

Schunk starts by asking, and then seeking to answer, the following questions:

These and other concerns were the focus of the second Schunk user and technology dialog on the topic of “Successfully introducing human-robot collaboration in the company”.

It became clear that ergonomic relief for people in everyday work will become a central aspect of human-robot collaboration in the future. The focus is increasingly on “human-centered automation”, as expressed by Tea Barisiç of Kuka.

The range of participants was as diverse as the topics of the user and technology day. The leading robotics companies were represented along with system integrators, representatives of the automotive industry, mechanical and system engineering, research and the supplier industry.

The upcoming robotics revolution is driving technologists, process owners and works councils alike. Above all, the specific practical relevance proved to be a valuable focus of the event.

From the point of view of Professor Dr Markus Glück, chief innovation officer and managing director of research and development at Schunk, four goals are dominant in the current discussion when it comes to introducing human-robot collaboration:

Sebastian Höpfl, Head of Product Management Gripping Systems at Schunk, explained how standards-compliant and economic design of human-robot collaboration applications can be achieved.

Although the standards are well controlled, the main challenges lie in the practical implementation and in particular in the validation of the transient contact according to ISO/TS 15066.

It makes sense to contact the certifying organizations, such as BG, TÜV or Dekra as soon as possible, and to discuss the planned applications.

Basically, he advised against over-engineering when beginning human-robot collaboration.

For example, applications with secure hold, manual guidance or speed and distance monitoring were often much easier and faster than complex applications with force and power limitation. And you learn much faster.

“Products have to be simple and flexible,” said Schmid.

The fact that Schunk has recently put a gripping system kit specifically for UR robots on the market exactly meets this requirement: the different end-of-arm tools, such as grippers, quick-change interfaces and force / torque sensors, can be connected with the robot arms through “plug and work” and put into operation.

The goal is a spontaneous, flexible and scalable automation. Höne advises subdividing the human-robot collaborative process into different sections and providing it with different safety functions.

Looking ahead, in Höne’s view, there was plenty of untapped potential, particularly in the fields of “easy to use” and “deep learning”.

How the biometric limit values according to ISO/TS 15066 can be determined and tested in practice was presented by Dr Daniel Meixner from GTE Industrieelektronik.

He introduced load cells with special springs and damping elements as well as pressure measurement methods.

During the practical tour, the visitors were able to find out from different exhibitors live demonstrations of different human-robot collaboration projects and where the challenges lay.

The various applications resulted in lively discussions on strategies, concrete approaches and practical implementation. The playful testing of possibilities and safety functions also took up a lot of space.

Incorporate employees into human-robot collaboration projects at an early stage

Tea Barisiç, from the field of Corporate Innovation at Kuka in Augsburg, demonstrated that human-robot collaboration projects, in addition to all technology, must focus on people in particular.

On the basis of surveys at human-robot collaboration workplaces, she addressed the question of how human-centered automation can succeed.

Barisiç suggested creating a college environment for employees to playfully and without pressure learn how to use human-robot collaboration systems and build trust in the new technology.

She recommended that both the works councils as well as the occupational safety officers and the individual employees be involved in the planning at an early stage.

At the end of the event Markus Glück summed it up: “The relief for the people will be the great added value of HRC.”

And he further emphasizes: “We have to start with human-robot collaboration, because the demographic change is right around the corner. In the near future, thousands of employees will retire, so we have to safeguard the next generation now.”