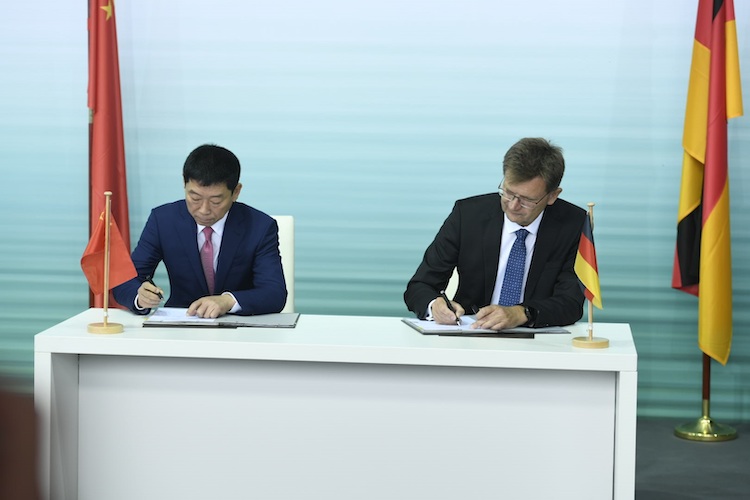 The BMW Group and the Chinese manufacturer Great Wall Motor have signed an agreement to produce Mini electric vehicles through a new 50:50 joint venture based in China.

During a recent event for autonomous and connected driving attended by China’s Premier Li Keqiang and Germany’s Chancellor Angela Merkel in Berlin, the BMW Group and Great Wall Motor committed to founding a new joint venture, “Spotlight Automotive Limited”, for the development and production of electric vehicles in China.

The establishment of the new company is subject to approval from the relevant Chinese authorities and the completion of business registration procedures.

The joint venture will be located in Jiangsu Province, where both partners will together create a new state-of-the-art production facility.

The production of future battery-electric Mini vehicles in China, the world’s largest market for electromobility, is a key element of Mini’s continued strategic development within the BMW Group’s Strategy “Number One > Next”.

It is another significant step towards the electrified future of the MINI brand, coming in addition to start-of-production next year of the first battery electric MINI at the brand’s main plant in Oxford.

“This strategic partnership is a clear win-win for the BMW Group and Great Wall Motor, enabling us to contribute to China’s ambitious plans to ramp-up new energy vehicles and reduce emissions in the mobility sector.”

The joint venture agreement was signed by Wei Jianjun, founder and chairman of Great Wall Motor, and Klaus Fröhlich, member of board of management BMW for development.

Fröhlich said: “The strengths and expertise of both companies complement each other well.

“Our experience as a pioneer and leader in the field of electrification, coupled with Great Wall Motor’s proven track-record in efficient industrialisation, enables us together to drive the growth of the largest e-mobility market in the world,.

“With our joint approach, we can quickly scale up production and increase efficiency in the highly competitive segment of compact electric vehicles.”

Wei Jianjun said the signing of the agreement “opens a new chapter in Sino-German cooperation”.

He said: “Great Wall Motor and the BMW Group share a commitment to promote new energy vehicles. With the combined strength of both partners, our new joint venture will accelerate the uptake of electric vehicles.”

The BMW Group is firmly committed to continuing the successful cooperation with the established sales structure and channels in China and has no plans to set up an additional sales organisation in China for future Mini electric vehicles from this joint venture.

The joint venture’s activities will focus on the development, procurement and production of electric vehicles for the Chinese market.

In recent years, BBA has become a cornerstone of the BMW brand’s success in its largest market.

Around 560,000 BMW brand vehicles were delivered to customers in China in 2017 – more than in the next two largest markets, the US and Germany, combined.

Two-thirds of all BMW vehicles sold in China last year were produced by BBA.

This underlines the brand’s additional global potential, which will now be significantly supported through the joint venture with Great Wall Motor.

The successful strategy behind the continuing expansion of the BMW Group’s global production network obeys a clear rule: production follows the market.

This means that increasing production in our largest markets does not lead to a corresponding decrease in production in other plants, but rather the reverse.

For example, although BMW production in China and the USA increased significantly between 2007 and 2017, production in Germany during that time also grew by almost a quarter, to around 1.15 million vehicles a year.

A similar expansion strategy could, therefore, accelerate development of the Mini brand significantly, without questioning the BMW Group’s commitment in the UK, where the company has made significant investments.