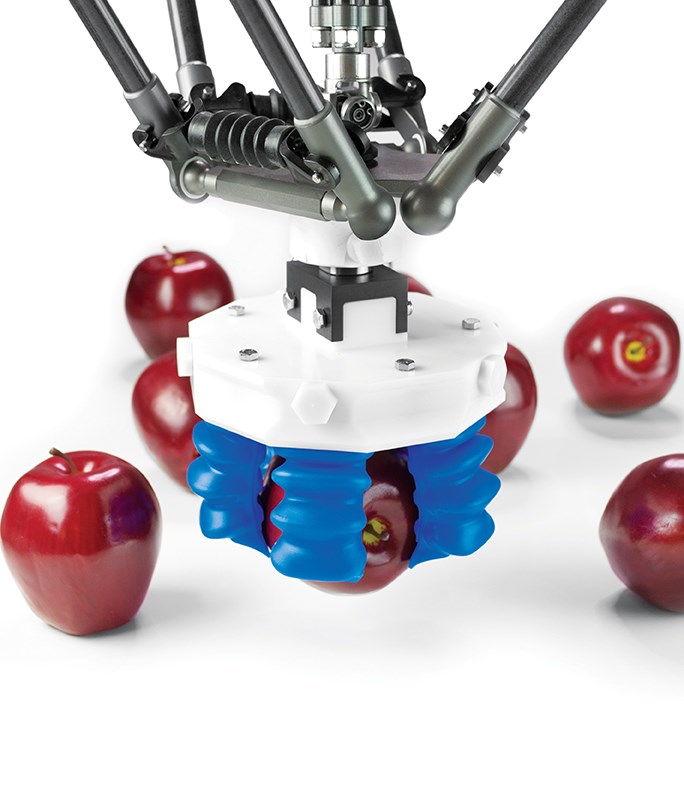 ABB is backing a new technology which will enable robots to pick up and handle fragile items that would be damaged if current grippers were used.

ABB’s partnership with Soft Robotics provides a perfect example of how proactive engagement with a startup can make all the difference when it comes to improving innovation processes.

Who says a robot has to be made of metal? For the past decade, Harvard’s George Whitesides and his army of post-doctorate fellows have been rewriting the rules on what constitutes a robot.

Through a collaboration between Harvard and DARPA, the innovation arm of the Department of Defense, the Whitesides Group at Harvard University has been focused on a new breed of biologically inspired “soft robots”.

The challenge was initially to create a robot that could make its way underneath a pane of glass just 20 mm above a surface.

While most robotic engineers attempted to solve this problem with traditional, rigid robots, Dr Whitesides drew inspiration from nature to create a new class of soft robots made entirely of elastomeric polymers. It was that challenger mindset that made way for a breakthrough in the field of robotics.

The earliest applications of the technology to come out of the DARPA collaboration were in surgery and other biomedical applications.

But a major unmet need and opportunity in industrial automation were recognized: The majority of robotic solutions today are based on hard linkages, making it difficult for them to pick up soft and variable objects, like fresh produce, or interact safely with humans.

If the new robot technology could safely manipulate and transport organs and soft tissue without damage, it could easily grasp delicate and variable products that had previously been off-limits to automation, like fresh produce or consumer goods.

This premise resulted in the foundation, in 2013, of Soft Robotics as a spin-off from the Whitesides Group.

Getting the upper hand

The underlying design for Soft Robotics’ technology was inspired by the octopus’s tentacle – a dramatic shift away from the traditional robotics approaches involving hard linkages, sensors and servo motors.

This inspiration led to the invention of soft robotic actuators made entirely of polymers that do not require sensors or other electromechanical devices for operation.

Soft Robotics’ novel approach solves the problem through material science, not through higher levels of cost and complexity.

The computational power of the system is built into the gripper itself – a proprietary blend of materials with microfluidic channels that, when actuated, mimic the soft tissue of the human hand.

Prof. Whitesides’ work at MIT spawned an entirely new area of research, with soft robotics becoming a focus at Harvard University and the associated Wyss Institute, Cornell, Stanford, MIT and numerous other institutions.

While there is now significant academic work in this area, Soft Robotics has been the pioneering force in developing the first and only commercial applications.

The commercial need is driven by the fact that only 12 percent of non-automotive industries are automated by robots today because solutions for tasks that are either unstructured or that call for dexterous manipulation of variable product have not been available.

By leveraging the properties of soft and compliant materials, Soft Robotics has been able to build a fundamentally new set of adaptive and dexterous robotic hands and automation systems that open up completely new applications.

Labor-starved industries such as food and beverage, advanced manufacturing and e-commerce can now realize the power of robotic automation.

Soft Robotics’ technology can now manipulate objects that vary in shape, size and weight, and that are easily damaged.

The most immediate need for this type of technology was seen to be in food and agriculture, advanced manufacturing and e-commerce, where automation is needed not only to meet increasing market demand and labor scarcity but to manipulate the variable and fragile nature of the product.