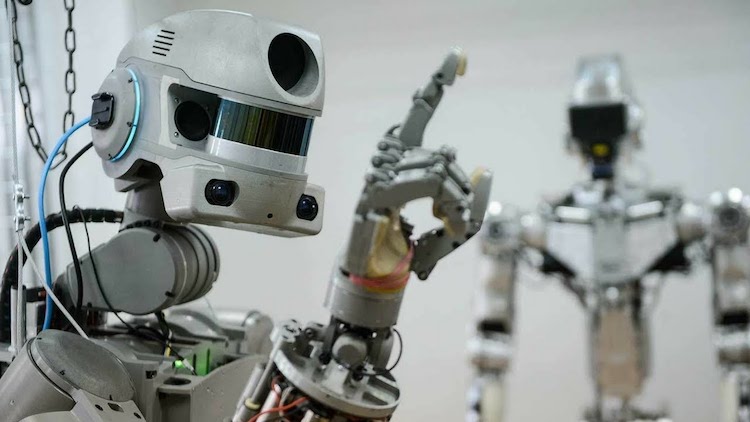 The Russian space agency is planning to send its humanoid robot Fedor to the International Space Station.

Fedor stands for Final Experimental Demonstration Object Research and seems to have been developed as a fighting robot.

Fedor can shoot guns, drive cars and use a variety of tools, including drills, according to a video by Interesting Engineering (video below).

However, what Fedor will be used for on the ISS – and indeed whether it will actually go – is not clear.

As well as Fedor, another humanoid robot is being developed for the ISS. That one is called Robonaut and is a product of Nasa.

Robonaut – which didn’t have any legs at first, just upper body, head and arms – has already been on the ISS, but has been broken for years, according to the IEEE.

These two robots basically herald a future the likes of which have been envisioned in science fiction for decades.

It’s inevitable that such machines will be used for spacewalks and external repairs on ISS which are currently done by human astronauts.

Though the human astronauts are clearly capable of coping without the robots, it simply makes more sense to use robots for what are, ultimately, actually quite dangerous missions.

And as the technology becomes more sophisticated, the robots will end up looking like the many we have seen in films and television shows like Star Trek and others.

Recently, a small, spherical robot called Cimon was sent to the ISS. Developed by IBM, Airbus and the German space agency DLR, Cimon is more an exploration of artificial intelligence and communications technology, specifically natural language processing, since it doesn’t have any limbs.

Combining advanced NLP and AI with the humanoid form of robot will eventually give us the first truly humanoid robotic spacefarers.

Whether Nasa, the Russians or anyone else will go one step further and combine organic materials into the construction of the humanoids to make them look more realistic remains to be seen, but it’s probably inevitable.