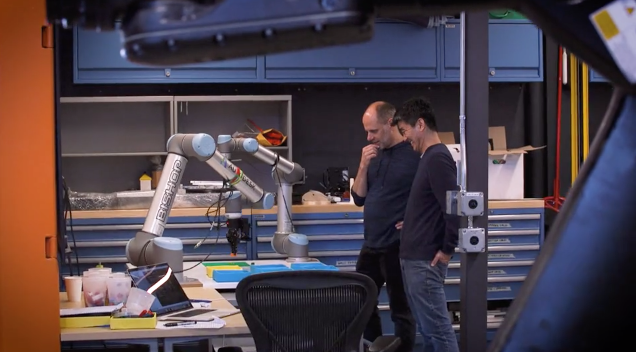 The Lego world has always interested other companies, some of which have copied the to create modular systems in many areas, including large-scale real building construction.

Autodesk has developed a system based on the Lego approach which the company says is suitable for their customers, who are “often using industrial robots to assemble their products and buildings” in sectors such as manufacturing and construction.

The Autodesk system uses what looks like a Universal Robots machine (see pictures).

As precise and powerful as industrial robots can be, “they’re nowhere near as smart or adaptable as grade-school-aged humans”, says Autodesk.

But Autodesk wondered if robots really could learn to assemble anything in the world in the same way that a child learns how to make an airplane out of colorful plastic bricks.

That is a much more complex challenge than it may seem to us non-roboticists.

If you visit a factory today, you’re likely to find teams of people that spend months or even years programming industrial robots to do just one task, over and over again. Like, say, spot welding in precisely the same location, all day every day, on an automotive assembly line.

The programming process is incredibly tedious, complicated, and frequently error-prone. And since the training of robots is so time-intensive and the result is a highly inflexible – even if productive – machine, the outcome is a business environment that restricts innovation.

If it takes nine months to program your robot to perform a single task, you’re not going to change the design of your product or introduce new technology into your factory – it would simply take too much time and money.

Machine learning could change all of that.

For the past two years, a small team of researchers at Autodesk’s artificial intelligence Lab on Pier 9 in San Francisco has been working on a project called Brickbot.

Led by Mike Haley and Yotto Koga, the project aims to redefine how our manufacturing and construction customers engage and collaborate with robots.

By equipping a couple of industrial robotic arms with cameras and various sensors – then creating neural networks that allow them to intelligently process and respond to all the corresponding data – the Brickbot team has created a robotic system that can infer what’s going on in its environment and then adapt to accomplish an assigned task.

The task? Sort through piles of toy bricks, select the appropriate parts for a given design, then assemble that design by snapping and stacking the bricks together in the correct order and position.

This may seem like child’s play, but imagine what might be possible once Brickbot’s automated assembly technology is built out and scaled up to power the factories and construction sites of tomorrow.

These environments will require increased flexibility and adaptability, because as our economies demand more customization of products and buildings, changes to designs will need to be implemented seamlessly, in real time.

Koga, a software architect with a PhD in robotics, says: “By starting with plastic bricks, we’ve been able to keep the project manageable while still having the freedom to experiment from the design stage all the way to a finished product.

“Now we’re close to taking the next step. We’re planning to work closely with a manufacturing customer and a construction customer to see how the Brickbot technology can be applied in the real world.”

So, while Brickbot may currently be toying around with kid bricks, the technology’s offspring may someday enable our industrial robot sidekicks to make anything.