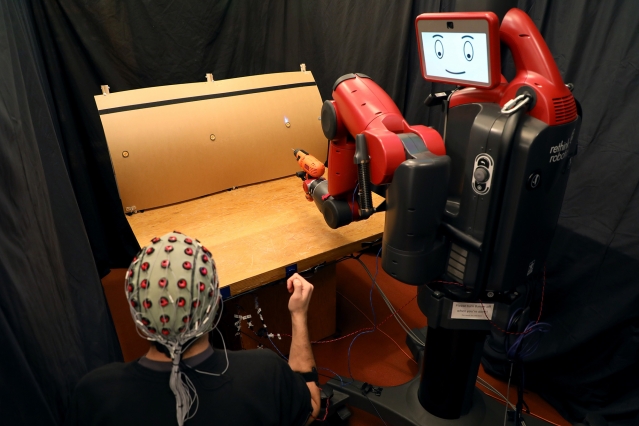 OpenBCI has launched a new version of its brain-computer interface as well as new electrodes which connect to the device.

The device itself resembles a cycling helmet and measure brainwaves, or electroencephalogram data, to use the technical term.

The company also provides software and a biosensing board, all of which enable users to monitor the electrical activity of their brains.

And although it’s not OpenBCI’s area of direct research, the possibility of using such BCIs to control machinery and robots has been demonstrated by other organisations.

The Kyoto Advanced Telecommunications Research Institute, for example, has conducted experiments in which numerous humans wearing BCIs were able to control robots, as reported by The Verge.

Using the Kyoto BCI, a user is shown being able to control a robot arm at the same time as balancing a ball on a board. (See video below.)

And MIT has demonstrated a BCI which was connected to a Rethink Robotics two-armed industrial robot (main picture). The human test subject wearing the BCI was able to get the robot to do some drilling work.

MIT has also shown a device which looks like an exoskeleton with its own arms – two of them – which could obviously double the productive capacity of the human wearing it.

As well as gleaning EEG data, some researchers also acquire electromyogram – or EMG – data from the brain. They can also get data from the muscular activity from the human subject.

The MIT’s Computer Science and Artificial Intelligence Laboratory director, Daniela Rus, who supervises the work, says: “This work combining EEG and EMG feedback enables natural human-robot interactions for a broader set of applications than we’ve been able to do before using only EEG feedback.

“By including muscle feedback, we can use gestures to command the robot spatially, with much more nuance and specificity.”