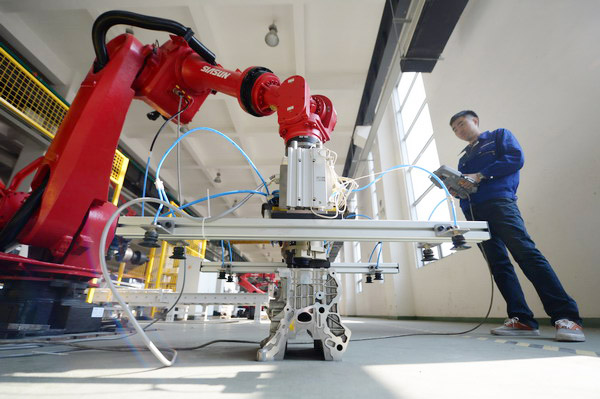 The industrial robotics and automation sector is continuing to grow fast in China.

The latest report to confirm this trend comes from the communist Chinese government propaganda outlet Xhinua.

China has been the world’s biggest buyer of industrial robots for several years now.

The majority of industrial robots bought by Chinese companies tend to be made by overseas companies.

Big names such as Yaskawa, ABB, Fanuc and others have been doing a roaring trade in China, and setting up manufacturing operations in the country.

But in the past year or so, Chinese makers of industrial robots have been emerging and enjoying considerable success.

According to figures reported by the news agency Xinhua, 131,000 industrial robots were “domestically made” in 2017.

It adds that, by the end of 2017, there were more than 6,500 enterprises engaged in robot production.

However, while domestic production has increased, the actual market share of domestically made robots fell for the first time in five years, to below 27 percent in 2017.

The agency was quoting statistics collated by the China Robot Industry Alliance, one of the main industrial robotics associations in the country.

A similar report by China Daily, which was also getting its statistics from CRIA, seemed to indicate the Chinese robotics sector is breaking records and is doing better than the Xinhua report is suggesting.

The communist Chinese government has been incentivizing the development of advanced technologies in order to diversify the economy.

Apart from a matter of national pride, there is the prospect of advanced economies in the West increasing their use of robotics and automation to level the global playing field and growing their own manufacturing base.

The US, for example, is reported to be seeing an upturn in its manufacturing production, and while the government may have wanted more humans to find employment as a result, much of the growth is being driven by an increased use of robotics and automation technologies.

However, China is also investing heavily in other, related sectors of technology, such as artificial intelligence and supercomputers.

The government has prioritized these sectors because it sees them as the best way to maintain growth in its economy.