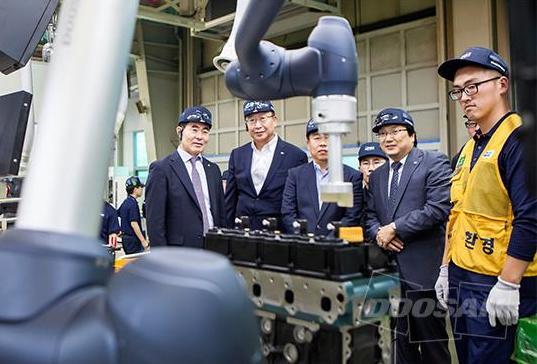 The company says the application of Doosan Robotics collaborative robot to its “G2” engine production will lead to the “improvement in the working environment” and increase productivity.

Doosan Corp is a massive 122-year-old industrial conglomerate which generates annual sales of approximately $16 billion and has a market capitalization of around $2.2 billion. That’s just one part of the overall Doosan Group.

The robotics division is very new, and the company only unveiled its cobot last year.

The company’s G2 engine (pictured above) is used in a variety of industrial and heavy vehicles, such as forklift trucks, tractors, buses and so on, and is part of the Doosan Infracore business. The G2 is said to be a low-emission engine.

Executives from Doosan Infracore’s global research and development team took part in an event at which the new robot was demonstrated working on the G2 engine. (See main picture.)

In this process, the cooperative robot has injected the injector into the existing system in which the worker repeats the injection process of the injector by hand.

This appears to be referring to the nozzle which directly injects fuel into the engine.

The Korea Robot Industry Promotion Agency selected Doosan Infracore as the lead certification target for evaluating the improvement of the work environment as well as improving the working environment by reducing the worker’s musculoskeletal burden through the introduction of cooperative robots.

With this safety certification, Doosan Infracore says it has been able to install cooperative robots that do not require fence or isolation space.

A spokesperson for Doosan said: “After Doosan Infracore’s cooperative robot certification process, we were able to confirm that the domestic cooperative robot technology, such as Doosan’s Robotics, is at a high level that meets international safety standards.”

Doosan Infracore plans to use its cooperative robots to increase production efficiency and work value through the acquisition of safety certification.