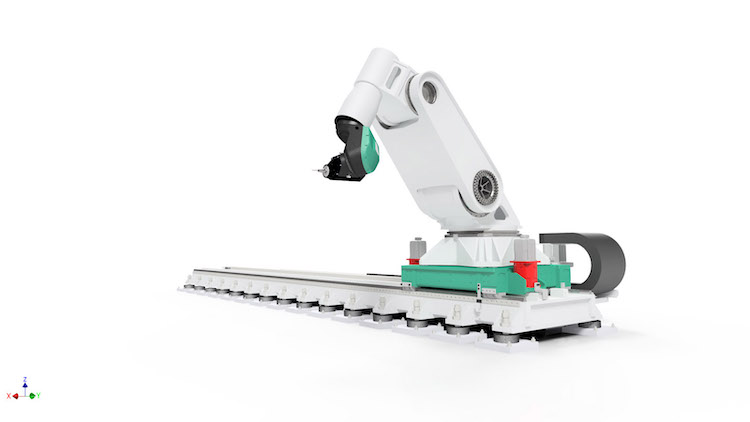 The Fraunhofer Institute in Germany is developing what it says will be the “next generation of industrial robots”, which integrate new kinematics for milling, customized, high-precision manufacturing

In a bid to provide the production technologies they will require, three Fraunhofer Institute teams are working together on what they say is “the next generation of industrial robots which will facilitate cost-effective production processes”.

The researchers are focusing on developing a new kinematics for milling lightweight materials, metals, and steels. The aim: achieving a production tolerance of just 0.1 millimeters all over the robot workspace starting with the very first component.

More and more consumers are demanding made-to-order, customized products. The production facilities of tomorrow will need to be efficient and versatile if they hope to meet increasingly stringent requirements and the specific needs of each customer – all while mastering the pressure of rising costs.

High-precision machine tools that impart a certain geometrical shape to workpieces remain the solution of choice. Conventional industrial robots have simply been unable, due to their insufficient precision, to supplant such machine tools.

Primarily due to the gear units, low robot stiffness deflects the tool – reducing its appeal for use.

Indeed, production staff must comply with extremely tight production tolerances every time they machine lightweight materials, such as aluminum or carbon fiber reinforced plastic (CFRP), as well as metals, and steels.

Customized production, even for a batch size of one

The project partners are the Fraunhofer Institutes for Production Systems and Design Technology IPK, for Manufacturing Technology and Advanced Materials IFAM, and for Structural Durability and System Reliability LBF.

The researchers say they must overhaul the kinematics if the robot is to prove successful.

The robot proceeds from point A to point B of the component being machined by traversing a linear unit, a type of rail.

Jan Hansmann, project leader at Fraunhofer LBF, says: “The system simulations we conducted during the design phase indicate that we can achieve a precision objective of plus/minus 0.1 millimeters.

“This will be possible starting from the very first component, despite the process forces acting on it. Manufacturers can therefore customize production, even for a batch size of just one unit.

“Under the exposure of process forces, the robot will stray far less from its programmed target path. The robot can consequently drill a hole at the intended spot of the component with far greater precision, for instance.”

To ensure high precision, the team of researchers is developing a new drive concept for individual axes. Partially direct drives are used, which are considerably stiffer during operation than today’s high-tech gear units.

And a new climate-control strategy minimizes imprecision due to temperature fluctuations. The robot is also equipped with a cnc control for machine tools. Last but not least, the new Flexmatik features an active vibration control system.

Thanks to its linear unit, the Flexmatik exhibits a workspace on par with large portal milling machines – and better accessibility.

Compared to a portal milling machine, the Flexmatik does not require a special heavy foundation. This keeps construction costs lower and grants users flexibility in setting it up. Fraunhofer researchers want to complete a functional prototype by the end of 2018.

Their innovative milling robot can handle a broad range of applications – including the machining of large CFRP structures such as fuselages, the milling of components for gas turbines, and the re-contouring of press tools.

Sven Philipp von Stürmer, project leader at Fraunhofer IFAM, says: “The Flexmatik is a suitable choice for many applications in practically all sectors which use machine tools.

“But it’s not about replacing machine tools. The Flexmatik can instead be a useful addition that shares workloads. The ultimate goal is to make production processes more cost-effective.”