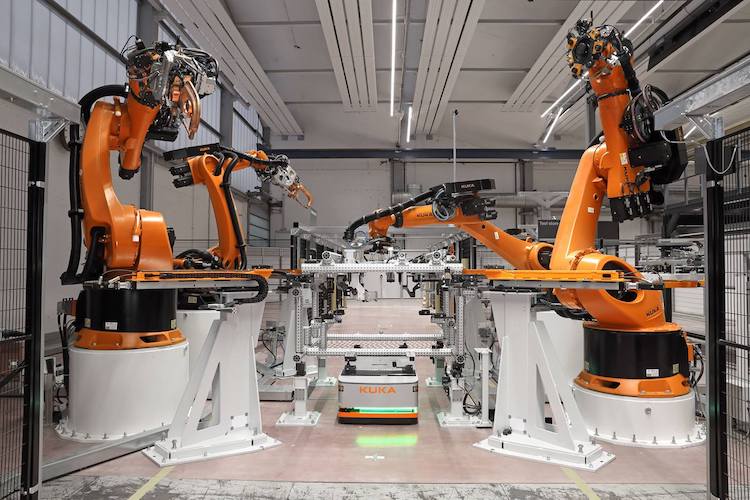 Kuka says the system is designed to help prepare manufacturers for “the production of tomorrow”.

“Different products can be manufactured on the same system – customized production is possible.”

Kuka invited customers and partners to see demonstration at the company’s SmartProduction Center in Augsberg, Germany, where “a vision becomes reality”.

The smart system is centered on the new company’s software package Kuka SmartProduction_control.

The industrial robot maker, which recently launched a range of autonomous intralogistics vehicles, says it has all the necessary information and controls the processes, from the robot to the automated guided vehicles.

Dr Andreas Bauer, software architect in the Kuka Automotive division, says: “Our intelligent software has an overview. It knows where the moving AGVs are located, which component the AGV needs to deliver to the robot, and quickly prepares a conversion.”

“We can offer this with matrix production,” says Bauer.

Manufacturers often have to ask themselves questions such as:

A smart solution is needed, says Kuka, which is why it developed matrix production.

Together with the automated guided vehicles, the Kuka SmartProduction_control software package, which is based on artificial intelligence technologies, ensures, among other things, that production is flexible and versatile, claims the company.

A product-neutral production facility requires the separation of production and intralogistics.

The decoupling of intralogistics from production is another key advantage of smart matrix production.

Controlled by Kuka SmartProduction_control, the AGVs fetch tools from a tool store and then transport them into the production cells that are to be equipped.

At the same time, the AGVs move to the centralized material warehouse, which is decoupled from production, in order to transfer the centrally-stored components required for the production process into the cells.

Dr Johann Härtl, head of competence center of the Kuka automotive division, says: “With the configurable production cells, combined with the freely programmable intralogistics and our new Kuka SmartProduction_control software package, we are able to provide our customers with everything they need for flexible and versatile production.”

In order to demonstrate the principle of matrix production to Kuka customers, the company build pilot system which has been put into operation.

Customers were invited to experience the matrix concept at first hand.

The system is based on standardized production cells. All cells are equipped with product-neutral basic functions and can be simply expanded with product-specific tools depending on the level of orders and batch sizes.

The system revolves around equipping the production cells and transporting the components: everything is carried out fully automatically by AGVs.

The individual robots pick up the components supplied to them by the AGVs and join them using the corresponding technology.

In the test cell, car doors and wheel arches for different manufacturers are manufactured on the same system. Conversion is carried out in a short space of time.

The intralogistics structure consists of AGVs and a warehouse in which the components are provided. The dedicated tools, on the other hand, are located in the tool store.

A software package ensures that the automatic process runs smoothly: Kuka SmartProduction_control is familiar with all activities at all times, proactively controls them, and thus has an overview of the motions of the AGVs, their battery charge and the current status of the production cells.

What is the best way to explain theoretical considerations? By implementing them in reality – this is precisely what Kuka claims to have done with the matrix production concept.

In the SmartProduction Center, customers can see for themselves the impressive advantages of the matrix solution. Manufacturing different products on the same system, enabling the production facility to breathe, customized production: all of these things are possible with matrix production, claims Kuka.

Larry Drake, CEO Kuka automotive division, says: “The versatility of the system is perhaps the most decisive criterion. In this way, we can meet customer requirements. We are at the forefront of developments in this field.”

The system is converted within a short time. Compared with previous rigidly linked production, the production facility requires the same space, but can be optimally distributed within that space.

Due to the centralized logistics, less personnel is directly tied to the system and to the logistics.

Furthermore, intermediate storage areas and material provision at the system are dispensed with. Matrix production is therefore also more cost-effective.

In this way, “the entire value chain is networked, thereby enabling holistic optimization of the system”, says the company.