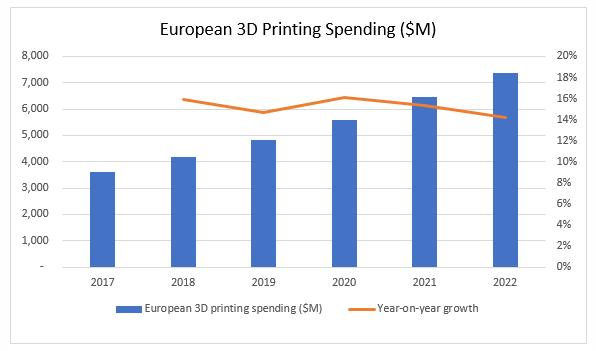 European purchases of 3D printers, materials, software, and related services are expected to total $3.6 billion in 2017, according to the latest update to the Worldwide Semiannual 3D Printing Spending Guide from International Data Corporation (IDC).

The combined spending on 3D printing for Western Europe and Central and Eastern Europe will experience a five-year compound annual growth rate (CAGR) of 15.3%, with revenues reaching $7.4 billion in 2022, says the report.

According to IDC, the 3D printing market is evolving rapidly, with the European market continuing to show good momentum and 2018 proving to be a turning point.

“It will enable mass customisation and printing of different products while reducing costs and recycling excess printer powder. Product weight can also be reduced, and fewer tools will be needed because 3D printers can replace some of them.”

Though 3D printing hardware generated the largest spending in 2017, the focus on materials will drive associated spending in the coming years, with a CAGR of 20% in the forecast period, exceeding the hardware component.

Services will remain a key part of the market, as consulting and system integration services are a critical component of the 3D printing solution deployment.

Looking at the verticals, discrete manufacturing accounted for more than half of total spending on 3D printing in the wider region in 2017, and will continue to be the largest investor by industry, with a CAGR of 14.5% for 2017–2022.

Within discrete manufacturing, the automotive and aerospace sub-industries are the biggest contributors (and also the most mature sub-industries), while the medical sector is expected to develop further in the next few years, with a projected 19.5% CAGR in the forecast period.

Other verticals, such as healthcare and professional services, are already using 3D printing, with spending at over 10% of the total market. Healthcare providers in particular are expected to grow their spending in 3D printing, with a CAGR of 20.9% from 2017 to 2022, as these organisations will adopt internally and develop direct skills and capabilities around 3D printing.

The use cases that generated the largest revenues for 3D printing in 2017 in Europe were prototypes ($755 million), aftermarket parts ($522 million), and architectural designs/models ($353 million).

In 2022 prototypes and aftermarket parts will remain the top two use cases, followed by dental objects and medical support objects. Over the forecast period, the fastest-growing use cases will be tissue/organ/bone, dental objects, and speciality food, with compound annual growth rates above 20%.

Western Europe is driving spending in the wider region: as shown in the latest European Vertical Market Survey, more than 17% of respondent organisations are adopting or planning to adopt 3D printing in 2018.

In Central and Eastern Europe 3D printing is gaining in popularity too. The technology is starting to transform many industries in the region — the portfolio of 3D printing use cases is already vast, is evolving quickly, and differs from industry to industry.