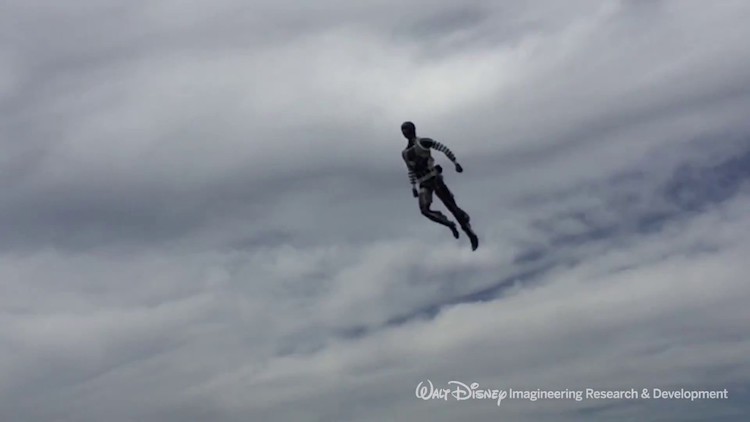 Stuntronics figure can autonomously decide when to perform somersaults while flying through the air, says Disney (see video below)

The stuntman, or stunts person, has always been highly regarded by filmmakers and fans even though very few of them are famous.

Everyone knows that behind every famous action film star is a stunt double who undertakes to do the dangerous things that maybe nobody should do anymore in this day and age of computer-generated imagery and special effects which can make everyone and everything look real even when they’re not.

But no matter how realistic the CGI, most people would probably be able to tell the difference between machinima and real cinema.

That might be the evential reason for Disney developing a robot that can do some of the stuff you might see the average superhero do on screen – like flying serenely through the air or doing somersaults while jumping from one tall building to another, as the average superhero is required to do on occasion.

But for the time being, Disney is planning to show off the acrobatic robot at its theme parks.

Disney calls its new humanoid robot its “Stuntronics figure”, and says it is “capable of accomplishing extreme aerial maneuvers with precision”.

Animatronics – things that you might see in the Jurassic Park movies – is not new. Mechanical humanoids were also used in early Terminator films, but Disney has taken things much further.

Disney’s Stuntronics figure is far more capable physically than any film robots or animatronics systems before it.

Disney’s Imagineers division has been developing the robot for some time, and an earlier version was called Stickman, which could perform somersaults while flying through the air.

These types of manoeuvres are fairly common in computer games, which action films have increasingly come to resemble over the years.

It’s not possible to replicate everything a game character does because the virtual world offers inherent advantages, but the Stuntronics robot is impressive nonetheless in that its actions look highly realistic, and the system is somewhat autonomous.

Disney says: “In their mission to create a realistic robotic figure capable of performing complex, acrobatic stunts, Imagineers designed a 90-pound Stuntronics figure to use sophisticated onboard sensors to make its own real-time decisions—all while flying 60 feet in the air.

“It knows when to tuck its knees to perform a somersault, when to pull its arms to twist, and even when to slow down its spin to make sure it sticks that perfect landing.”