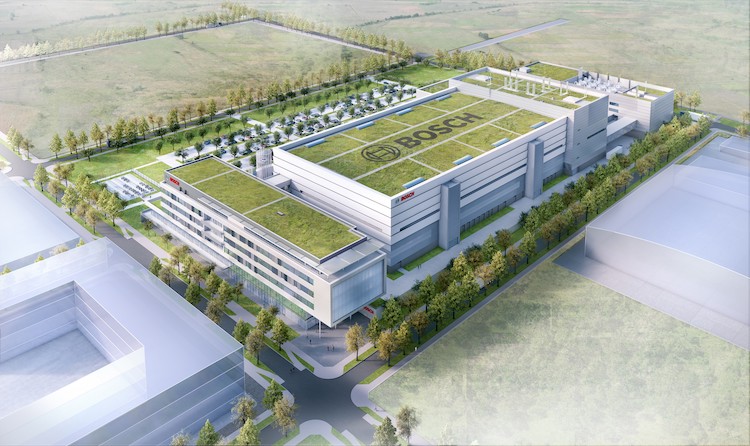 German industrial giant has started construction on a billion-dollar semiconductor manufacturing facility – or, in Bosch’s words, a “factory of the future” in Dresden, Germany.

The company said that the foundation stone laid recently in Dresden is “a key milestone” in the construction of the Bosch Group’s “state-of-the-art” wafer fabrication facility.

Construction is scheduled to be completed in late 2019, when installation of the production machinery will start.

The ceremony marking the formal beginning of the construction project was attended by senior Bosch executives and various dignitaries from the world of business and politics.

Dr Dirk Hoheisel, member of the board of management of Bosch, at the formal ceremony in Dresden, said: “Today we are laying the foundation stone for the wafer fab of the future, and with it the foundation for improving people’s quality of life and their safety on the road.

“Semiconductors are the key technology for the internet of things and the mobility of the future. When installed in cars’ control units, for example, they enable automated, efficient driving and the best possible passenger protection.”

In his address, Peter Altmaier, the German Federal Minister for Economic Affairs, underlined the central importance of this Bosch investment: “We are today taking an important step toward securing the future competitiveness of Germany as an industrial location.

“The research community in Germany and Europe is an excellent one, but we cannot afford to rest on our laurels.

“In the field of microelectronics, we also need engineering skills and know-how, and especially industrial-scale manufacture and application, in Germany and Europe. Today’s ceremony is an important step on this route.”

As a supplier of technology and services, Bosch is investing roughly one billion euros in its new location in the Saxony state capital. The first associates are due to start work in the new plant in early 2020.

After Reutlingen, the Dresden plant is the Bosch Group’s second wafer fab in Germany. With it, the company aims to expand its manufacturing capacity, and thus to boost its competitive edge in global markets.

Semiconductors are finding their way into more and more applications relating to the internet of things and mobility solutions.

According to the market research company Gartner, semiconductor sales around the world rose by some 22 percent in 2017 alone.

Otto Graf, who will manage the new plant, said: “Construction is proceeding right on schedule.

“During the construction phase, we will move some 7,500 truckloads of earth, lay about 80 kilometers of piping and ductwork, and mix more than 65,000 cubic meters of concrete – 8,000 concrete mixers-worth.”

Following a rollout phase, pilot manufacturing operations are expected to start at the end of 2021.

The plot of land – measuring some 100,000 square meters, or roughly 14 soccer fields – will also be home to a nearly 72,000 square-meter multistory building housing offices and production space.

Up to 700 associates will be involved in the highly automated chip manufacturing process, working to plan, manage, and monitor production.

This also includes modifying the production processes and evaluating the data from Dresden in Bosch’s global manufacturing network.

Saxony as a business location

Michael Kretschmer, the minister-president of the state of Saxony, said: “Bosch’s decision is an important milestone. The construction of the new wafer fab here in Dresden will create many other attractive jobs, strengthen Saxony’s reputation as a location for technology and business, and is good for Germany and Europe as well.

“This project will play a decisive part in securing a leading role for European industry as a whole in the technologies of the future.

“This investment in such a major project is a sign of confidence in Saxony, in its people, in the research and industrial network that has become established here, and in its innovativeness.”

In its search for a new location, Bosch considered several cities around the world.

In Hoheisel’s words, “Dresden is an excellent microelectronics cluster.”

He added that the city’s infrastructure is excellent: everything is easily accessible, and the transportation connections are good.

As Hoheisel pointed out: “We want to work closely with semiconductor companies and universities to increase semiconductor technology’s competitive edge – not only in Germany, but across Europe.”

Semiconductors: key technology for the internet of things

Manufacturing semiconductor chips always starts with a silicon disc, or wafer. The bigger the wafer’s diameter, the more chips that can be made per manufacturing cycle.

This is one reason why the new Bosch factory will focus on the production of 300 mm wafers: Compared with conventional 150 and 200 mm wafer fabs, 300 mm wafer technology offers greater economies of scale.

Semiconductors are extremely small integrated circuits with structures measured in fractions of a micrometer.

It takes place in clean-room conditions, as even the tiniest particles in the ambient air can damage the delicate circuits.

The Dresden plant is expected to generate production data equivalent to 500 text pages per second – written out on paper, that would be more than 42 million pages a day, weighing 22 metric tons.

This is why artificial intelligence will play a special part in chip manufacturing in the factory: the highly automated production facilities analyze their own data in order to optimize their processes.

As a result, the quality of the chips rises while production costs go down.

Furthermore, planning and process engineers can access this production data at any time to accelerate the development of new wafer products or minimize tolerances early on in the manufacturing process.

“We need creative minds for our connected and automated manufacturing operations – particularly experts in wafer technology, like process engineers, mathematicians, or software developers,” Graf said. Many new associates have already been hired for the Dresden plant, he added, and there has been no drop in the number of applications.

Bosch has been making semiconductor chips in various forms for more than 45 years, mainly as application-specific integrated circuits (ASICs).

Bosch ASICs have been used in vehicles since 1970. They are customized to individual applications, and essential for functions such as engine management or airbag deployment.

In 2016, every car rolling off the production lines worldwide had on average more than nine Bosch chips on board.