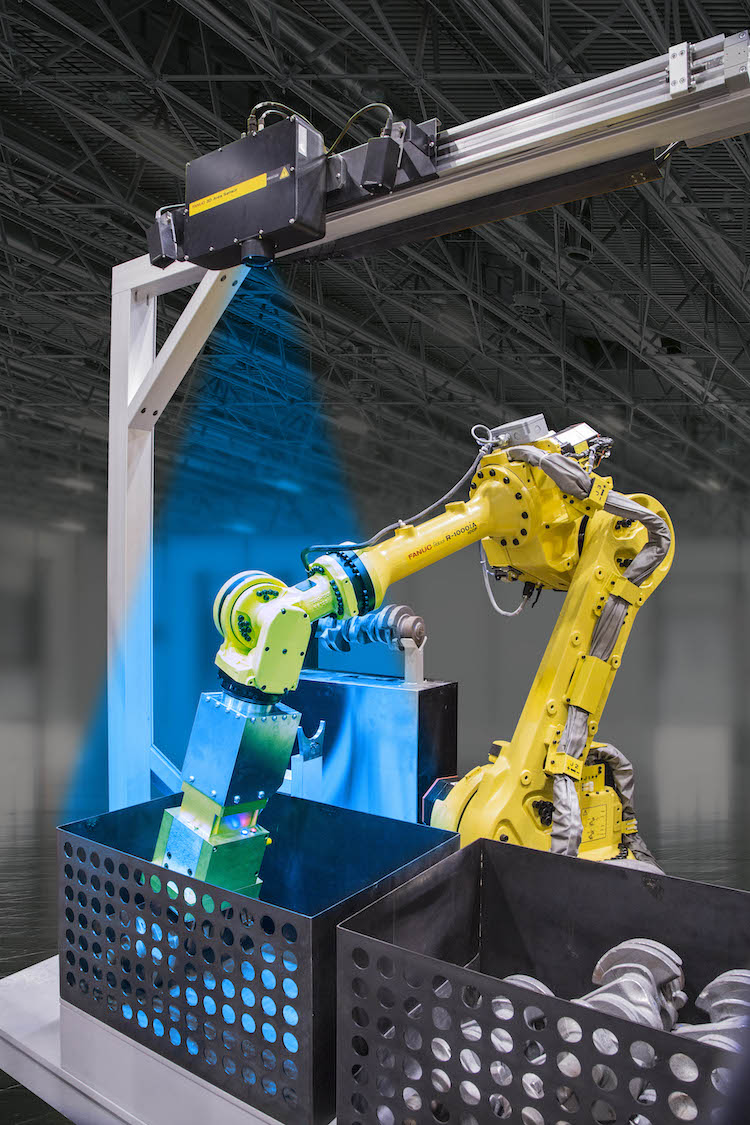 The world‘s largest industrial technology show will highlight key automation trends with a view to helping visitors understand how they will affect manufacturing and other sectors.

Organisers of the International Manufacturing Technology Show – scheduled to take place in Chicago, in the US, from September 10th to 15th – say the event will bring people and automation closer together – literally – with exhibits highlighting the benefits of collaborative robots, or “cobots”.

Mike Cicco, president and CEO, Fanuc America and a board member of the Association for Manufacturing Technology, which owns and produces IMTS, says: “Automation suppliers have made tremendous leaps with software, control and sensor technology that enable quantifying what the robot ‘feels’.

“If it feels anything out of the ordinary, it will stop before exerting too much force.

“Where robots previously operated in restricted areas, we can now bring people and automation together to improve assembly operations.”

As cobot examples, consider a situation where a robot bin picks a heavy ball screw and holds it while an operator inserts bearings or an electronics assembly where a human performs the complicated chore of routing cables through a chassis and a robot performs repetitive tasks, such as driving screws.

Tim Shinbara, VP of technology at AMT, says: “Collaborative robots, mobile robots, IIoT-enabled systems, AI and automation careers will be some of the dominant automation trends at IMTS 2018.”

Cicco believes that machine tool owners and managers attending IMTS should explore collaborative and mobile robots, and that’s true for both high-volume and low- to medium-volume operations.

He envisions a work cell where the robot could tend the CNC, such as for loading and unloading on long part runs.

The cobot could function without requiring additional guarding and the operators could go about their routine without safety concerns – improvements to safety standards that reflect current technology now make this possible.

For small batches or other instances where manually tending the CNC makes sense, the robot could be pushed to the side or moved to another cell.

Cicco says: “Automation mobility is moving forward. Equipment used to be bolted to the floor, but now there is a whole slew of what people are calling mobile robots, which pairs an automated guided vehicle with an articulated arm robot.

Instead of investing in automation for each milling operation, a mobile robot can tend multiple machines, notably for operations with long cycle times.

Mobile robots can be self-propelled, manually wheeled or skid-mounted. In the past, relocating a robot would have required reteaching all of its movement points using a pendant control, a time-consuming task.

The new generation of mobile robots eliminates this issue. Using fiducial markers – reference dots placed on the CNC – the mobile robot uses a vision system to capture images of the dots.

As long as operators orient the robot relatively close to its original position, the robot can recalibrate all of its “teach points”, saving hours of programming time.

“We’ve seen quite an advancement with mobile robots that can be parked away when not in use and then be quickly and effectively deployed,” says Cicco.

For job shops and manufacturers who want to save their human talent for high-value operations, using mobile robots for tedious tasks make sense.

As more than a side note, Cicco says that the industry is running into a shortage of robotic talent.

Just as job shops and manufacturers cannot find people who want to become machinists, they are having a hard time finding people to program and maintain robots.

Responding to this need, automation suppliers continue to work toward a goal of making operating a robot as intuitive as powering up a smartphone or PC.

IMTS 2018 marks the 10th anniversary of MTConnect, a set of open, royalty-free standards that fosters greater interoperability between controls, devices and software applications, which was launched at IMTS 2008.

At the time, Cicco, an electrical engineer, served on the MTConnect Technical Committee for AMT.

He explains that the vision at the time was for the manufacturing world to develop a protocol that enabled controls, software and devices to communicate with the simplicity of connecting USB devices to a PC, e.g., a mouse, a computer and a printer, all from different manufacturers, that can work seamlessly simply by installing the appropriate drivers.

Cicco says: “AMT and IMTS were light years ahead of everyone else when it came to funding, leading the development and marketing of MTConnect.

“Fast forward a decade, and you can see a host of automation and machine tool providers demonstrating the benefits of connected devices at IMTS 2018.”

One of the premiere demonstrations will occur at AMT’s Emerging Technology Center in the North Building.

Shinbara says: “For the first time at IMTS, we will demonstrate an MTConnect-enabled ecosystem.”

The demonstration features a vertical CNC mill, a ROS-I (Robot Operating System-Industrial) interface and an articulated robotic arm that autonomously transfers the milled part to a CMM.

“Using data from the CMM, the CNC could compensate for tool wear by recalculating its offsets to maintain tolerances closer to the median of the specification.”

Cicco says: “As another MTConnect example, automation providers can run specific analytics that indicate the health of the robotic system and its individual components.

“Instead of unplanned downtime for check-ups and maintenance, especially if a part still retains a high percentage of useful life, automation systems can communicate what needs maintenance and when, essentially achieving zero downtime.”

In short, connectivity is the key for companies that want to improve quality, hold tighter tolerances, push machine utilization rates to 90 percent or accomplish a host of other continuous improvement objectives.

AI, students and the future

Looking back a decade and comparing that to exhibits at IMTS 2018, one of the more impactful technology advances will be the use of vision systems on robot arms for bin picking.

Cicco says: “Early attempts to use cameras on robots would have been deemed ‘science projects’ instead of the basis for future commercial products.

“That has changed very rapidly. Today, industry puts robotic 3D bin picking and 3D inspection systems into use every day to increase productivity. Small- to medium-sized business owners might think such systems are too high tech, but that’s not necessarily the case.”

One of the over-the-horizon automation systems being demonstrated at IMTS 2018 will combine a vision system with artificial intelligence and a deep learning algorithm so the robot can teach itself to 3D pick an entire bin.

The robot will use a camera to take a picture of what’s in the bin, but it has no idea what the part looks like or where and how to pick it up.

The algorithm will gauge whether the pick succeeds or fails, enabling the system to learn how to make a good pick as it empties the bin.

Cicco says: “The cool thing about deep learning is that if two robots perform the same operation and share their successes and failures over a neural network, they will cut learning time in half because they will never repeat the same error.

Shinbara says: “The beauty of AI and data science is that you can correlate events to causes that would not have been found naturally.

“A second area of AI is with process optimization. Imaging if we applied AI to the ETC demonstration.

“As the system ‘learns’ its way through the process, it could automatically shift to rough profiling operations to obtain more life from the tool instead of sending a signal to replace a worn tool.”

The second area of AI capability focuses on very discrete tasks. A third and nascent AI capability, according to Shinbara, is a holistic approach, such as systems that learn to improve movements between the robot and the CMM or a CNC that adjusts feeds and speeds over particular time to achieve better quality or optimize tool life.

Contrary to consumer media reports that claim robots will take over the world, robots are actually taking over dull, repetitive, and dangerous tasks to free scarce human resources to focus on other, typically more fulfilling jobs.

Cicco says: “People need to embrace change. Industry cannot do things the way it did 10 years ago and expect to remain profitable or competitive.

“We want to change the mindset so people view automation as a new career opportunity or see how it enhances their current job. That’s true whether someone is a high school student, assembly worker, technician, shop owner or a PhD candidate.”

Students can experience automation first-hand at the Smartforce Student Summit.

“Students, parents and instructors can explore a myriad of potential careers at the Smartforce Student Summit, as well as through scores of exhibitor automation demonstrations at IMTS 2018.”