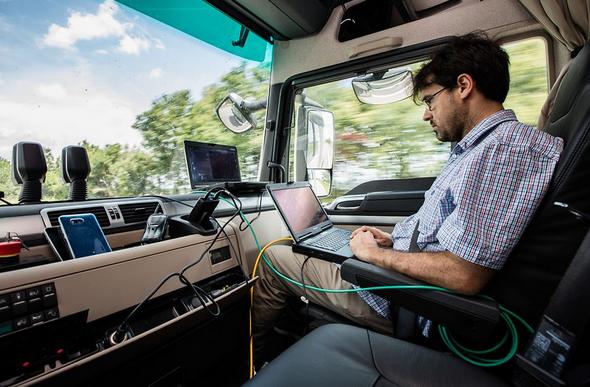 DB Schenker, together with its cooperation partners MAN Truck & Bus and Hochschule Fresenius University of Applied Sciences, has sent two digitally networked trucks into practical use on a German highway.

In the presence of Federal Minister of Transport and Digital Infrastructure, Andreas Scheuer, a truck “platoon” set off from the DB Schenker branch office in Neufahrn near Munich via the A9 digital test field to Nuremberg. The federal government is funding the pilot project with around 2m euros.

The term “platooning” refers to a system in which at least two trucks drive in a tight convoy on a freeway, supported by technical driving assistance and control systems.

All of the vehicles in the platoon are linked to each other by an electronic “drawbar” that uses vehicle-to-vehicle communication. The truck in front sets the speed and direction, and the others follow.

Federal Transportation Minister Andreas Scheuer said: “A visionary research project for our digital test site, the A9 highway. The project marks the start of the automated and networked future of road haulage.

The regular test runs of the networked trucks began on June 25 along the 145-kilometre route. Trials are being carried out without any loads until early August.

After that, the platoons will be on the road every day, making up to three routine logistics trips and laden with part loads of, for example, machine parts, drinks, or paper.

During the practical tests, the platooning technology for logistics use will be further optimised, for example with regard to system safety, fuel consumption, and better use of space on freeways.

The project partners also hope to gain insights into the social acceptance of the networked driving style, as well as into transport policy and infrastructural prerequisites.

Since the collaboration began in May 2017 and the official handover of the test vehicles by MAN in February of this year, the truck drivers have been prepared for their role in the project through intensive training.

The psycho-social and neurophysiological effects of the new technology on the drivers in the platoon will be examined by Hochschule Fresenius with an accompanying study. This will allow important experiences of the truck drivers to be incorporated and their job profile developed further.