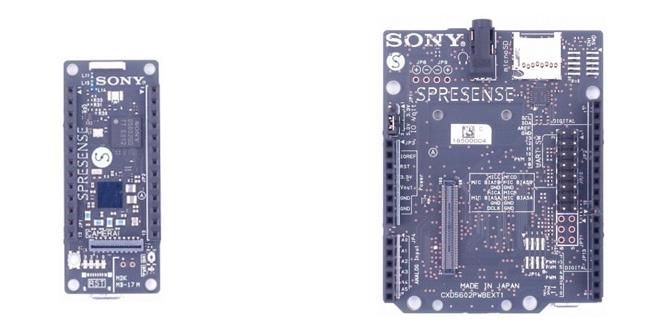 Sony Corporation has developed two new products, the SPRESENCE main and extension boards for IoT applications, equipped with a smart-sensing processor, which go on sale July 31.

A variety of systems for diverse applications, including drones, smart speakers, sensing cameras and other IoT devices, can be built by combining these boards and developing the relevant applications.

Positioning information and audio input/output functions are expected to become ever more important in the expanding IoT market.

The main board operates on low power and features a smart-sensing processor, with a built-in GNSS receiver and an audio codec that supports high-resolution audio sources.

It employs a hexa-CPU, multi-core configuration that is said to make it easy for anyone to create high-performance, highly versatile applications.

For example, the new board can be used to control a drone using GPS positioning technology and a high-performance processor, voice-controlled smart speakers, low-power consumption sensing cameras and other IoT devices, etc.

It can also be combined with various sensors for use in systems that detect errors in production lines on the factory floor.

The extension board, which is used with the main board, is equipped with a headphone jack, microphone jack, and SD card slot, which can be used to develop audio applications with audio recording and playback.

It is also equipped with a connector that can control the I/O voltage of the main board to switch from 1.8V to between 3.3V and 5.0V, making it possible to connect and utilize some open-platform, general-purpose extension boards.