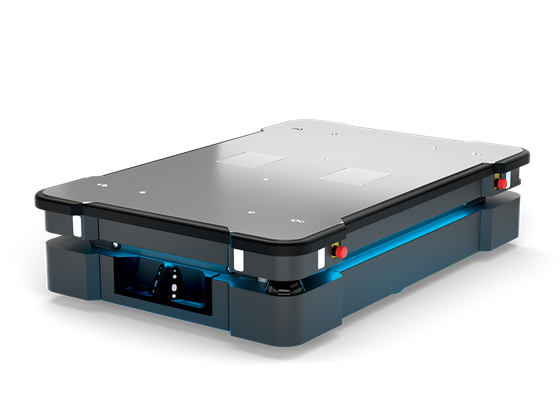 MiR already has two other similar products, called the MiR 100 and the MiR 200, with the number indicating how many kilograms it can carry.

The company says: “With a payload of 500 kg, speed of 2 m/sec and a footprint of 1350 x 920 mm, MiR500 is the largest, most powerful, fastest and robust collaborative, autonomous mobile robot from MiR.”

It adds that the MiR 500 is “equipped with the latest laser-scanning technology that delivers a 360-degree visual for optimal safety”. The machine also has 3D cameras which have a range of 30-2,000 mm above floor level to detect pallets, says the company.

In an exclusive interview with Robotics and Automation News a couple of months ago, the boss of MiR hinted at a new product launch.

Thomas Visti, CEO of Mobile Industrial Robots, also would have been mindful of the prospect of MiR being acquired by a larger industrial company.

Within weeks, MiR was indeed acquired by US industrial giant Teradyne, which has now become arguably the most important supplier of collaborative robotics technology in the world, having already acquired Universal Robots a couple of years ago.

Visti was clear, however, on the company’s philosophy of specialisation, or releasing a limited range of products instead of trying to please too many companies who may each want something different.

“We have been good at focusing,” said Visti. “So, instead of being half-good at making 20 robots, we focus on two and then we could say there might be a specific version for logistics, or hospitals or whatever, but here we are really good, and we keep focus.

“I tried to meet customer demand – big companies when they ask for custom versions. And being able to say ‘no’ can be a challenge.

“But what actually happens is that when you improve your product, they accept that you have a good product, and start buying it later on.”