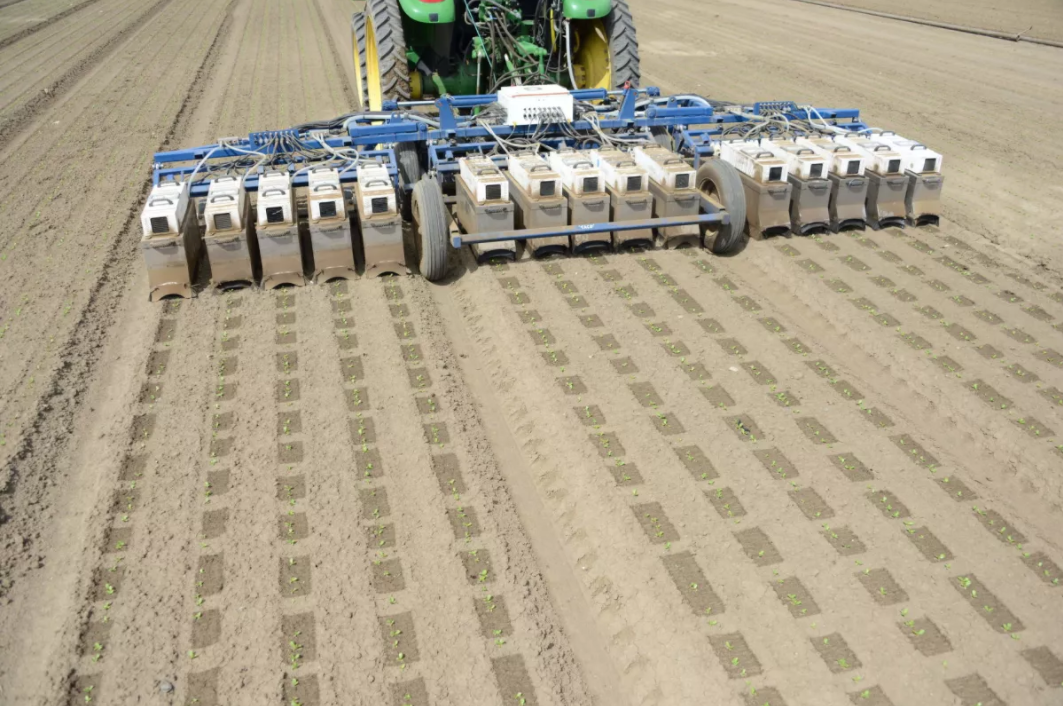 However, we do think all the technologies and companies mentioned below are offering something that will bring significant changes to the agricultural sector.

The combine harvester was a revolutionary machine, and is still arguably the most sophisticated piece of equipment at a typical large farm.

But increasingly it is being joined by machines that can think and make decisions for themselves – within given parameters of course.

Not only is a new generation of intelligent machines or robots ready to work on farms, there is a variety of sensor-based monitoring systems ready to flourish within the ecosystem of the internet of things which will, inevitably, assimilate farms.

Additionally, there are drones to consider. And – probably most surprisingly – the prospect of farms moving to urban areas, and taking the shape of what are called “indoor farms” or “vertical farms”.

In some areas, these indoor or vertical farms could be used to grow marijuana, but mostly, what’s being discussed is fruit and vegetables.

So, without any dope-fuelled procrastination, let’s get to the list, which includes links to related articles we may have published previously.

This company claims to have developed a fully automated indoor farming system that can be managed from anywhere in the world. Judging from the picture, farms can be the size of a typical shipping container.

CNH Industrial is a huge name in the agricultural sector, and its autonomous tractor concept is appropriately epic. Futuristic and impressive, the driverless vehicles is probably beyond the means of most small farms.

This startup has developed a strawberry-picking autonomous vehicle. If it can engage in strawberry-picking effectively enough, it could solve all the arguments in the US about immigration, since many legal migrants cross the border to work in the agriculture sector.

A relatively lightweight vehicle, this solar-powered weeding robot can be used for weeding and reduce the reliance on pesticides, according to startup EcoRobotix, which raised $11 million to grow its business.

Established as a business unit by industrial giant Bosch, DeepField Robotics would seem to have a bright future, by the admission of the people in charge – there are just so many solutions that could be developed for the sector.

With its tremendous resources, Bosch is not only establishing business units like DeepField Robotics, it’s also developing farm robots like Bonirob within the company. Additionally, it’s partnering with other companies – an example is given below.

A biotech company which is in the process of acquiring Monsanto – a company associated with genetically modified farm foods. Bayer is working with Bosch to develop sophisticated, IoT-based farming systems that may reduce the reliance on pesticides.

Indoor farming systems developer Plenty has received huge amounts of attention and investment and may become the first company to set up a chain of urban indoor or vertical farms which can compete with the likes of Whole Foods Market and other greengrocers.

This company developed a mobile vehicle designed around the needs of agricultural companies, but then it sold the technology to NextShift, which has broadened its application to industries beyond agriculture.

A variety of drone companies have been customising their vehicles for agriculture, including the largest drone maker, DJI, which is what the link is to. But while there is potential for their application, drones still have limitations such as flight time.

Innovations in lighting are probably going to be critical to the success of indoor farming of many types, and multimillion-dollar businesses like Helispectra are partnering with industrial giants like ABB oto make their greenhouse operations more efficient.

ASI develops crucial technologies such as that which drives CNH’s autonomous tractor. It also adopts other technologies, such as mesh networking, which may influence other companies in the industry to do the same.

Clearpath Robotics provides this unmanned guided vehicle that, in this instance, has been customised to deliver “precision irrigation” which, as the term suggests, can save significant amounts of water for farms and large-scale gardens.

Although this moves us a bit further downstream, closer to the consumer, food processing is also seeing significant amounts of innovation, including this one where Microsoft and Bühler are working to reduce the amount of food that is wasted.

Cucumbers are among the most popular salad vegetables, and picking them presents challenges because they are soft. But if anyone can solve the issues, it’s the boffins at the Fraunhofer Institute.

Sugarcane is one of the most valuable crops globally, and cultivation probably cover millions of acres. This company provides cloud-based software to monitor and manage large sugarcane fields.

Volvo demonstrated a self-steering truck for sugarcane harvesting in Brazil. The automaker seems keen on such technology since it has developed similar self-driving technology for the mining industry as well.

Another sign that computers are entering the agriculture sector in a big way, Smart Ag offers cloud connectivity and monitoring services for driverless tractors and can, as far as we understand, fully automate regular tractors.

Zahnradfabrik Friedrichshafen is a big name in the traditional automotive world. A few months ago, the company demonstrated its concept for a driverless tractor and other related technologies.

The robotic arm being used on the Singaporean farm in question is not being perched on eggs and used to hatch them, as the headline might suggest. It’s more a story about material handling, which is where robots are increasingly getting involved.

Primarily a software company, Universal Logic has developed a robotic solution which is proving popular with strawberry growers, with Agricultural Robotics ordering 100 of its “Neocortex” systems.

Many new innovations and great business ideas are emerging from universities, and this one is from the University of Illinois. It’s a relatively small mobile robot and its makers have set up a company for it called EarthSense.

Spread was probably the first company to demonstrate a viable urban farming business model. It was so long ago that we can’t find the story we did about it, so this is just a link to the company’s website.

This is another company we have yet to feature on the website, but that’s just two so far. Interestingly, this company’s systems hold out the promise of “pesticide-free farming”, which is obviously something everyone can support.

The demon weed was always going to become a big business once it was decriminalised and legalised, and so it has happened that quite advanced farming technologies – particularly in greenhouse management – have been developed in the sector.

Picking apples may sound like an idyllic way to pass the time, but as a full-time job in the heat of the summer, not so much. Hence this company’s apple-picking robot could become a must-have for orchard owners.

Tiny computers such as the Raspberry Pi and Arduino are being used to create highly sophisticated hardware-and-software systems that are within the purchasing power of many farms. The link leads to just one example.

As well as powerful chips and sensors available at low-cost, networking and connectivity technology – such as LoRa technology – is also available at much more affordable prices. All of which is leading to farms becoming IoT fields.

Another example of a “downstream” robotic system, this story proved quite popular as it tells of Fanuc robotic arms being used to process and pack lettuce for a Spanish company, enabling it to reduce its reliance on finding scarce human labour.