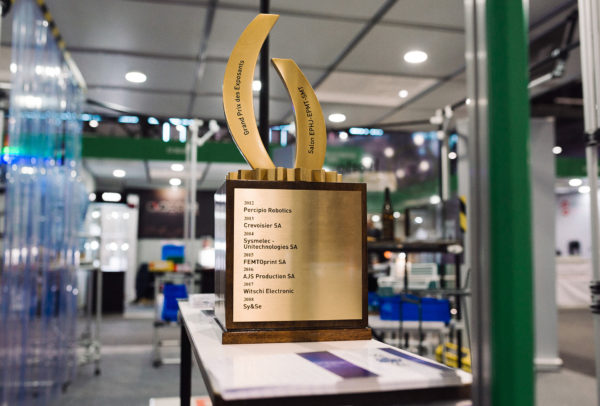 In a break with technological tradition, the young start-up from La Chaux-de-Fonds has created a sensation with the revolutionary new material bonding technology intended to replace glue or other welding techniques.

The competition was created seven years ago to honour the year’s most innovative project at the EPHJ-EPMT-SMT Trade Show.

This year, the Exhibitors’ Grand Prix attracted a large number of applications which were submitted to a jury of experts made up of Eric Rosset, Pierre Amstutz, André Colard, Olivier Saenger and Alexandre Catton.

The projects from this list of six nominees were then submitted to a vote by the exhibitors just before the show opened.

Following the vote, SY&SE, based in La Chaux-de-Fonds (in the Canton of Neuchâtel in Switzerland) received the most votes and therefore was awarded the 2018 Exhibitors’ Grand Prix at the evening party on the first day of the EPHJ-EPMT-SMT Trade Show.

SY&SE is a start-up from the Haute Ecole Arc Ingénierie which specialises in bonding glasses and ceramics to metals.

This fledgling company has perfected a new technology called Impulse Current Bonding (ICB) based on anodic bonding which allows materials to be joined without glue and at low temperatures whose expansion coefficients are very different.

Unlike glue or high-temperature welding, this technology allows the integrity of materials to be preserved and produces exceptionally strong, leak-tight assemblies.

Applicable on all scales and all materials, this technology could be beneficial to numerous industrial sectors, especially watchmaking and medical technology.