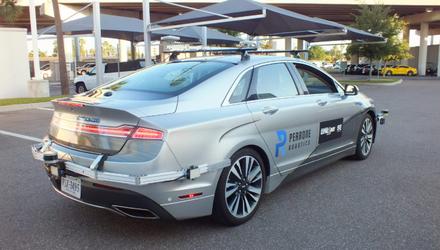 PRI brought one of their fully autonomous vehicles to the Tampa Selmon Expressway to give rides to the general public over three days in May.

The demonstrations were part of “SAE Demo Day” organized by SAE to let the public experience rides in an autonomous vehicle and to understand their perceptions and attitudes about autonomous driving. Riders were surveyed before taking a ride, and then surveyed immediately afterwards.

SAE is an international standards body defining many of the standards used in automotive applications today. Perrone Robotics’ CEO, Paul Perrone, previously chaired the On Road Automated Driving committee that defined the levels of autonomy (L1-L5) adopted by the automotive industry today.

Florida State Sen. Jeffrey Brandes, who has been a champion of autonomous vehicle use and adoption offered broad support for the event speaking to executives and the media as well as taking his own ride along with them over the six-minute course.

“Public comfort and acceptance of self-driving vehicles is crucial for their success, both in the near-term of testing and the future of widespread use,” said Frank Menchaca, SAE International Chief Product Officer.

“This Demo Day brings the most important audience to the dialogue—the public.”

Perrone Robotics Chief Marketing Officer Dave Hofert said: “We are very pleased to support SAE International in this effort. Our company mission is to enable broad-based autonomous mobility of all kinds and we believe that public engagement will drive awareness and acceptance of these vehicles.

“Through this demo, people will experience autonomous driving and can better make informed decisions about how autonomy could fit into their lives.”

PRI deployed their Lincoln MKZ on the highway, one of the several different types of vehicles the company has outfitted with MAX®, the company’s patented robotics software platform.

PRI integrated the vehicle with third-party sensors, including radar, LiDAR and GPS. The public experienced driving under fully autonomous control of the vehicle as it travelled over 50 mph along a course approximately 3 miles in length.

During the approximately six-minute ride, several autonomous manoeuvres were demonstrated so that the public could get a realistic sense of the car’s technical capabilities and cutting-edge autonomous technology.

These manoeuvres included: pacing a lead car at a safe distance, passing that vehicle when stopped, driving a curvy highway and accelerating up to 50 MPH, then slowing and performing a u-turn on the highway, and finally detection of, and braking for, a “careless” pedestrian who walked in front of the car.

Over 100 demonstrations were given during the week, with approximately 300 people taking rides. SAE collected and compiled feedback from the public and hopes to use it in its research regarding the public’s perception and attitudes about autonomous driving.

The Selmon Expressway, where the rides took place, is designed as an automated, reversible expressway which can also act as a test bed for connected and autonomous trials. THEA operates this expressway, and they were able to shut down the reversible segment allowing free access to the PRI vehicle and enabling the atypical u-turn on the highway.