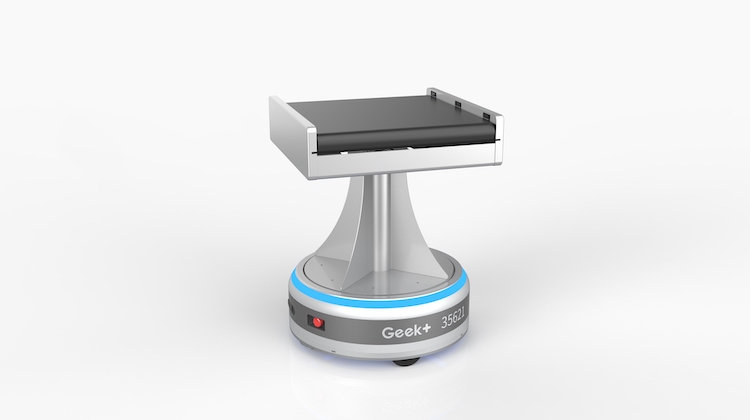 Geek Plus Robotics has launched the latest version of what it claims is “the world’s first interweaving sorting robot” for warehouses, which could be an alternative to conveyor systems.

The robot – called S20 – looks similar to the typical autonomous mobile platforms which have become familiar in roboticised warehouses, but it has a small conveyor belt on top.

Geek Plus says the S20 enables companies to automate their warehouses without having to install expensive fixed elements such as a traditional conveyor system.

Geek Plus says the S20 is available now to the global market as an “innovative and cost-effective tool to increase parcel sortation efficiency in warehouse distribution center”.

The company says the S20 system has been already operating in the distribution center of one of China’s largest e-commerce companies, and has “increased the efficiency significantly”.

Since its launch in a few months ago, a fleet of 200 units of the S20 robot has been taking sorting tasks 24/7 while achieving a benchmark of 10,000 pieces per hour, says Geek Plus.

Geek Plus says that, unlike traditional cross-belt sorter and regular robot sorting system, the S20 is designed to be “highly flexible and easy to use”, and means that warehouse reconstruction or a two-tier steel platform structure is no longer necessary, and “there will be a big saving on time and cost”.

The company says S20 integrates a high level of standardization and fast implementation, and usually takes 20 days to complete the entire system, including robots and software part.

Apart from that, Geek Plus’ independently-developed Robot Management System – which uses artificial intelligence and machine-learning technology – applies a “strong algorithm and flexible system scheduling to figure out the most effective path and minimize convergence”.

Lit Fung, general manager of Geek Plus Hong Kong, says: “In the entire process of supply chain in e-commerce and express industry, parcel sortation is always a major step.

“Driven by increasing demands for fast delivery from the customers’ end, many e-commerce companies choose to deploy robot sorting systems and have benefited from logistics automation.”

Fung adds that the S20 is just one of a range of new products the company is developing.

Fung says: “In the near future, Geek Plus Robotics will release more robotics solutions for warehousing and logistics such as self-driving forklift, updated version of SLAM (simultaneous localisation and mapping) navigation moving robot, mechanical arms for Geek picking system, covering every step in the supply chain. We have strong faith that a real unmanned warehouse will finally come true soon.”