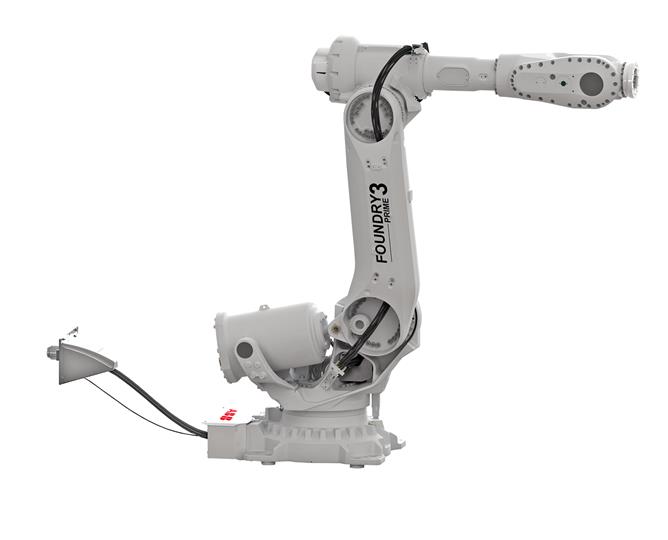 ABB has launched the third-generation of its “Foundry Prime” industrial robotic arm.

The company says the new robot “reduces maintenance cost by up to 60 percent” and operates at “15 percent less energy consumption”.

The different parts of the new robot can be cleaned in the same cell with zero changeover time, says ABB.

The company says the IRB 6790 is IP69-rated, which indicates “superior protection from water and dust ingress”.

ABB launched the new robots at the ongoing Automatica event in Munich.

The latest version of its Foundry Prime robot makes use of more than 13 years of industry experience, says ABB.

Per Vegard Nerseth, managing director of robotics for ABB, says: “ABB’s longstanding heritage of installing robot systems in automotive factories around the world helps us understand the challenges automakers face today, and how their factories might look tomorrow.

“This helps us make great robot solutions even better and continue to write the future for automation in the harshest operating environments.”

The IRB 6790’s high flexibility allows cleaning of different part geometries in the same cell with zero changeover time, which supports mass customization for automotive manufacturers as well as original equipment manufacturers and their tier suppliers.

In addition to increased flexibility and productivity, this solution provides increased speed and, on average, five percent faster cycle time.

Its design is focused on reliability and system uptime in conjunction with optimized maintenance to enable easier serviceability, which results in a lower total cost of ownership.

The third-generation Foundry Prime robot can work in an environment that is normally not suitable for industrial robots, with enhanced protection from heat, cleaning pressure, chemicals, and dirt typically found in harsh and wet environments.

It also has IP69-rated protection to prevent water and dust ingress whereas the cleaning chemicals can range up to pH 10.

The IRB 6790 is designed for high reliability in harsh environments and can reduce maintenance costs by up to 60 percent. The robot is available in two variants – one with a 205 kg payload with 2.80 m reach, and one with a 235 kg payload and 2.65 m reach.