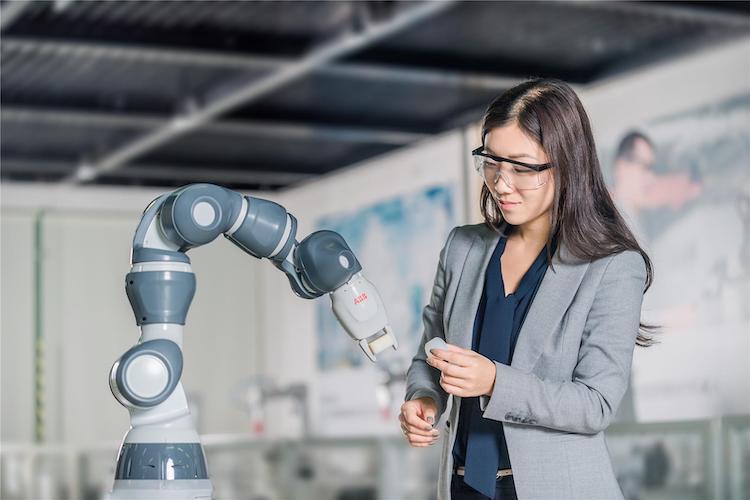 ABB has launched the newest member of its YuMi collaborative industrial robot family. The company had unveiled the model in Japan towards the end of last year, and this looks to be the formal launch in Europe.

The single-arm YuMi has the same safety features, precision and ease-of-use as dual-arm YuMi, says ABB, adding that it weighs less than 10 kg and has seven-axis dexterity.

ABB is expanding its collaborative automation offering with the launch of a new single-arm YuMi.

The new collaborative robot is also one of the first of a new generation of robots from ABB to be built on a flexible new modular design platform that will allow a greater variety of robots and sizes, and more tailored solutions.

In 2015 ABB introduced YuMi, billing it as “the world’s first truly collaborative robot”.

As part of the connected “Factory of the Future”, the YuMi family heralds a new era of robotic co-workers which are able to work side-by-side on the same tasks as humans while still ensuring the safety of those around it.

“It offers added flexibility and scalability to manufacturers of all sizes, helping to meet their current challenges and anticipating future ones.”

Like the dual-arm version, the single-arm YuMi can work safely next to human operators, while also offering a very small footprint and can be mounted on floors, tables, walls or ceilings.

This allows manufacturers to quickly and flexibly add collaborative applications to their production, with minimal interruption to existing operations.

The robot’s versatility means that the YuMi family of robots can be combined in many ways.

For example, a single-arm YuMi robot can be used to feed parts to a dual-arm YuMi to speed up cycle time, or added as an extra arm to integrate a testing and inspection station into an electronics assembly application.

The single-arm YuMi also features the same intuitive, easy-to-use lead through programming as the dual-arm YuMi, meaning even workers without specialized training can set up and operate the robot.

Combining this simplicity with the robot’s deployment flexibility can help manufacturers in many industries offset shortages of skilled workers.

It also removes entry barriers for many new potential robot users, particularly small and medium enterprises which are the backbone of many economies.

ABB says the key features of the YuMi robot are: