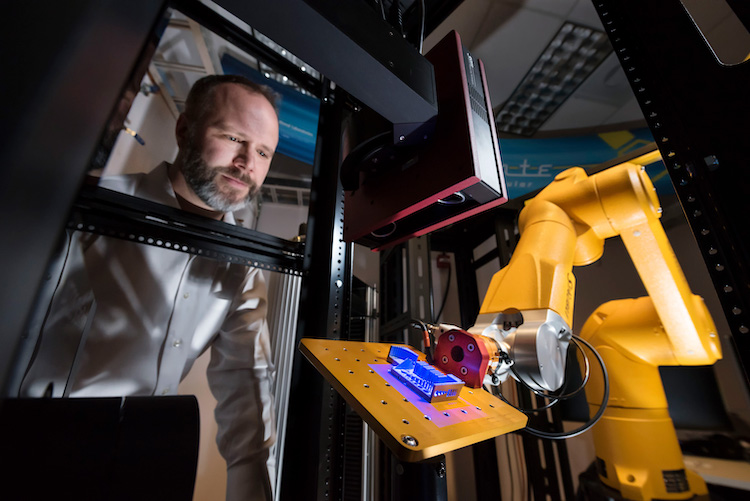 They call this flexible, modular and scalable system Alinstante, Spanish for “in an instant” (see video below). Sandia is seeking industry partners to help expand or discover more uses for the new robotic testing system.

The technology to speed up qualification and testing was the result of Sandia materials scientist Brad Boyce’s challenge in the spring of 2015. Boyce was working on a Laboratory Directed Research and Development-funded project to improve the qualification of custom 3D-printed parts.

“In traditional manufacturing of metals, there’s a lot of experience and finesse in process control to produce metals with uniform properties. When we went to laser manufacturing we had to take a step back and rethink qualification,” said Boyce.

Boyce had already developed a machine for high-throughput tensile testing – pulling on an object until it snaps – but for this project he knew he needed a more general, flexible solution. He turned to Sandia’s robotics group.

“Once we committed ourselves to automation, we realized that the barriers could be overcome,” said Boyce. “Yes, we invested some time and money, but the real challenge was getting ourselves out of the mindset of ‘business as usual’ to understanding that we need a faster solution.”

The commercial robot sits in the center of the hexagonal work cell with up to six “petal” workstations around it. Each workstation can have a different commercial or custom testing systems, and the workstations can be swapped in and out depending on the kind of tests needed.

Also, because of the hexagonal shape, multiple petals can be combined in a honeycomb-like structure. That allows handoffs from petal to petal to provide almost limitless testing scalability.

Sandia mechanical engineer Ross Burchard led the design of the work cell. In 2016, Burchard and an intern explored many different physical configurations before settling on the hexagonal petal design.

“My challenge was: How do you come up with a work cell with one robot and multiple testing stations that’s also modular and scalable?” said Burchard.

Once the configuration was selected, Burchard and his team built the first work cell. They adapted commercially available hardware wherever possible for efficiency and to save money.

“Safety is always our No. 1 concern,” said Tim Blada, the roboticist who is leading the design of the software interface. “Every line of code we write, every piece of mechanical fixturing we do, is always safety first. ‘How is this safe? Can I do this without risking any injuries?’”

By the end of the summer, Blada hopes to have a user interface that will allow a non-expert to place their parts on a tray in the parts rack, select a few tests and get their data automatically. The software architecture also needs to be modular so new modules and tests can be added easily, he said.

The prototype Alinstante work cell only has two testing stations and a rack where users can place their parts.

The first station is an off-the-shelf structured light scanner that can convert a scan into a 3D model for direct quantitative comparison to the original intended design.

The second station is a load frame for testing physical properties, such as tensile and compression testing, which is pushing on an object until it crunches.

Next, the team wants to add a laser-induced breakdown spectrometer to Alinstante, said Burchard. This test would be particularly useful for determining the batch-to-batch consistency in the chemical composition of parts in a minimally destructive manner.

“Sandia has testing labs that can perform all of these tests, however it takes a few weeks to schedule each of them, which can add up to one or two months of testing. Alinstante can reduce the scheduling burden for the testing, greatly speeding up the turnaround time,” said Burchard.

Alinstante also reduces the chance for human error and produces data that is more consistent and reproducible than human testers.

‘Scratching the surface’ of prototype testing and materials discovery

“Right now, Alinstante is really just scratching the surface of what it could be,” said Boyce. “We could integrate the printer, processing systems – such as a heat-treat oven or a grinder – and many other post-processing tests.”

X-ray tomography, corrosion testing and density measurements are just a few examples of the tests the team would like to add to Alinstante.

Blada added, “Alinstante can be used for rapid prototyping things or for small-batch manufacturing. This would be useful for any small business or industry where they’re making small batch parts and they need to test them or even package them.”

The Alinstante team is looking for partners to support the development of new modules that would meet its rapid testing, prototyping or research and development needs, said Boyce and Blada.

As a roboticist, Blada is looking forward to putting Alinstante’s endurance to the test. “In theory, you could run this thing forever, if you had enough parts,” he said.

As a materials scientist, Boyce is looking forward to being able to use Alinstante for rapid materials discovery and for foundational advances in alloy performance and reliability.

But even before this vision becomes reality, Alinstante can provide significant benefits. Boyce said, “Friday afternoon you tell the 3D printer ‘I want you to print this part 10 different ways and then go test each one.’ You come to come back Monday morning and Alinstante tells you which process was the best. Let the robot do all the logistics work and get the human out of the loop except for making the important engineering decisions.”

(Main picture: Sandia National Laboratories materials scientist Brad Boyce watches as the Alinstante robotic work cell scans a 3D-printed part to compare what was made to the original design. This test part was devised to push the limits of 3D printing technology. The goal of Alinstante is to speed up the testing of 3D-printed parts and materials science research. Photo by Randy Montoya.)