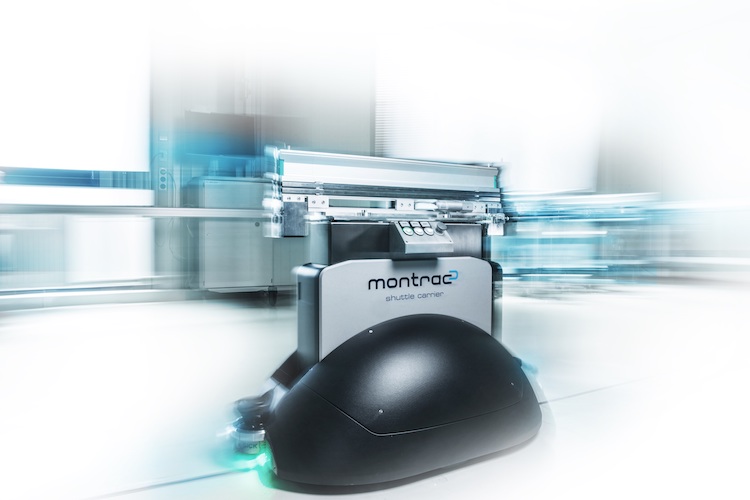 The company says it will also be showcasing five new product developments of their future-oriented automation and transport system “montrac”.

The product highlight, however, is the new “shuttle carrier”, which the company says is about connecting rail-bound workstations without rail.

Sven Worm, chairman of the board of MontraTec – which the company writes as montratec – says: “At our first attendance at the automatica we are directly starting with a world premiere.

“With the development of the ‘shuttle carrier’ we are at the same time optimizing the applications of our intelligent automation and transport system montrac and offering solutions for customers with extremely limited installation spaces.”

Worm is convinced that the new innovation of montratec will succeed in various industrial areas.

Using the self-driving “shuttle carrier” allows for the first time to interrupt the monorail track system without interrupting the entire manufacturing/production process and enables open spaces between track-bound workstations for escape paths, transport routes, and passages for employees.

The self-propelling “shuttle carrier” acts as a connecting robot on the floor: with the aid of integrated sensors it recognizes the respective route based on stripes drawn on the floor and follows them at speeds of up to 25 meters/min.

With the innovation of the “shuttle carrier“, the modular automation and tracking system montrac, so far consisting of a monorail system and self-propelling transport shuttles, is extended by another active component.

Based on smart logistic technology, the shuttles know precisely where the products need to go. The transport shuttles move with speeds of up to 55 meters/min and communicate via infrared with both the track sections and the route.

“At any time, each shuttle can manually be replaced or removed from the running system without stopping the system.”

Among the new montratec product developments to be presented at the fair are:

MontraTec can be found at Automatica at booth 320, in hall A5.