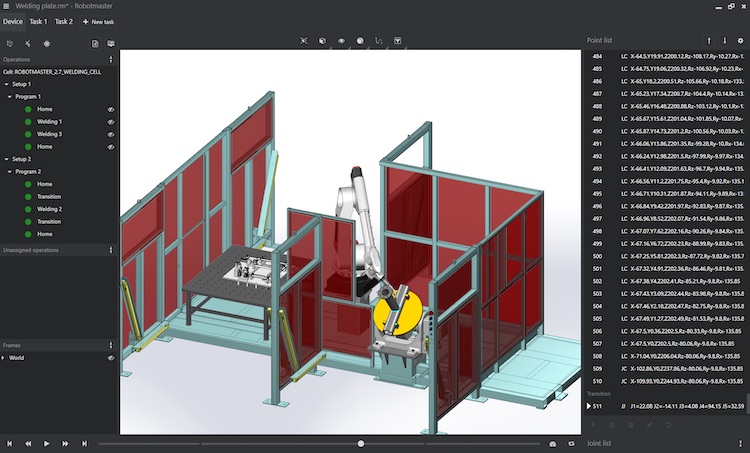 Hypertherm has launched a new version of its Robotmaster software, claiming it enables process experts to program without robotics or CAD/CAM expertise. (See video below.)

The new programming platform builds on the performance of Robotmaster’s offline programming CAD/CAM software that was first introduced in 2002.

The new Robotmaster V7, a standalone solution for programming robots, will make its public debut at Automatica 2018 from June 19 to 22 in Munich, Germany in Hall B5.309.

To create this new architecture, Hypertherm’s Robotic Software group, the developers of Robotmaster, added new experts to its team in mathematical optimization who understand artificial intelligence and deep machine learning, as well as simulation and game experts who are passionate about user interaction and applying their skills in the industrial space.

Since Robotmaster V7 uses integrated CAD/CAM functionality, for the first time, the power of Robotmaster can be used by welding, cutting and other process experts without buying or learning complex CAD/CAM software.

As in past versions, Robotmaster V7 imports paths, but now makes it even easier for end users to leverage any CAD/CAM tool choice.

It is an intuitive tool that anyone could use, with or without robotics expertise. It bridges the gap between robots and manufacturing by providing easy programming solutions for part manufacturing, says Hypertherm.

Chahe Bakmazjian, head of strategy, Robotic Software, says: “Robotics and CAD/CAM expertise are not a prerequisite to create error-free robot programs with Robotmaster V7 since it is a task-based robot programming platform built around the user, for the user.

“Robotmaster V7 also has unmatched flexibility and configurability and transfers the job to another robot brand or workcell, without task reprogramming. This is an industry first.”

It navigates complex part geometries and optimizes robot paths while synchronizing movements and preventing collisions between one or more robots, parts and tooling.

It can be used for offline robotic programming in a variety of industries including aerospace, automotive, consumer electronics, power generation/energy and welding.

The current version of Robotmaster offers support for these applications.

However, once V7 support is available for these applications, they will be more automated and easier to use.

Bakmazjian says: “The Robotmaster team saw the trend for multi-robot cells, with robots performing a combination of processes, including material removal, welding and polishing.

“This new framework allows our users to exploit the full capabilities of a multi-robot workcell with easy-to-use, advanced task sharing tools.”

The Robotmaster software platform’s optimization tools put Robotmaster on the map in 2008.

By creating software that enabled users to visualize and optimize robot trajectories, the developers helped to demystify robot programming.

In 2013, Robotmaster won Robotics Business Review’s Game Changer Award for outstanding achievement in robotics. In 2015, it made the list of CIOReview’s 20 Most Promising Robotics Solution Providers.

Hypertherm designs and manufactures advanced cutting products for use in a variety of industries such as shipbuilding, manufacturing, and automotive repair.

The New Hampshire based company’s reputation for cutting innovation dates back 50 years to 1968, with Hypertherm’s invention of water injection plasma cutting.