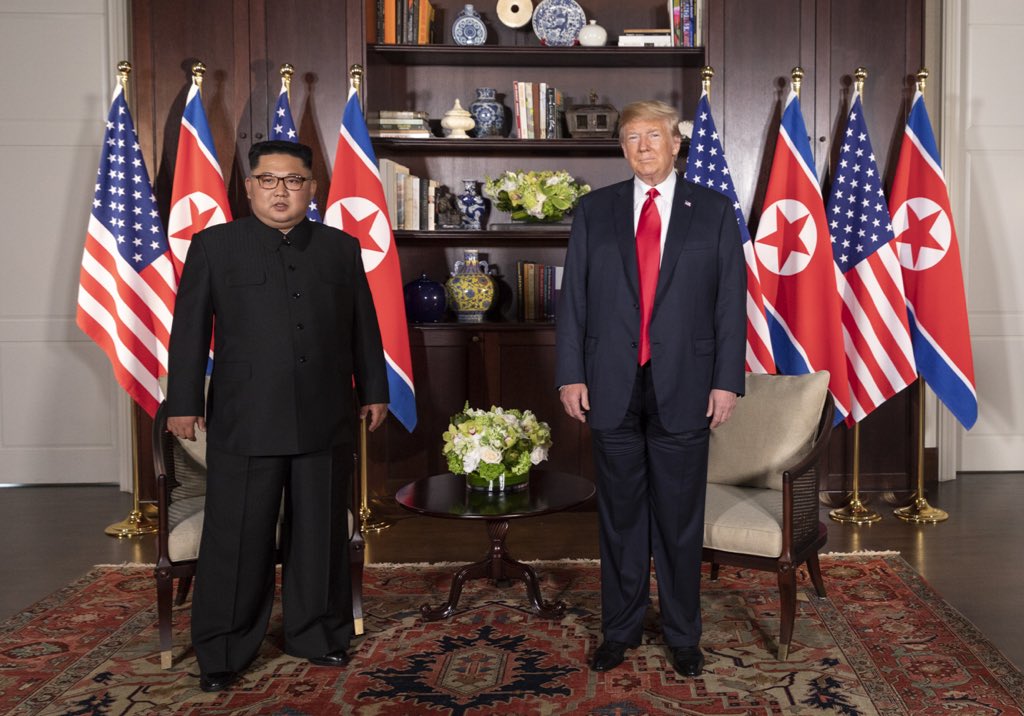 So, for the past 70 years, the country’s population of 25 million have had to live on food rations provided by the communist government.

There is no free enterprise or free anything much, so the economy has been in stasis from which if it emerged would see living conditions improve dramatically in a short space of time.

That’s if the communist government – or even communism – will allow it.

Whatever the politics, under its new leader, Kim Jong-un, North Korea looks ready to change its stance and maybe even lay down some of its arms.

The hereditary dictator met with US President Donald Trump last week in a somewhat historic summit in Singapore (main picture).

Trump said afterwards that he spoke to Jong-un about the immense commercial opportunities of real estate development in North Korea.

That may well be the case – if things get that far.

You would think that the commercial benefits of opening up its economy would make it an imperative, but North Korean decision-making has been a mystery for quite some time, so no one really knows what will happen.

But if we were to make a crude comparison to South Korea, we could perhaps project what’s in it for North Korea.

The population of South Korea is just over 50 million. Its gross domestic product is more than $2 trillion. That works out to be approximately $40,000 for every South Korean.

Across the border, the average North Korean has a share of the nation’s total GDP of around $25 billion, which works out to be about $1,000 each.

So, free-enterprise South Korea generates 40 times the amount of wealth that economically- and socially-closed North Korea does.

And that’s just the average, which would not indicate how terrible the situation is for people at the bottom end of North Korea’s socio-economic scale, if there is such a thing over there.

Given the economic gap between the two Koreas – and the fact that basically both countries are inhabited largely by one race of people – you would think that the North is in for a few years of very fast GDP growth.

South Korea is, in some ways, the most technologically advanced economy in the world. It has a higher density of robots in its manufacturing sector than any other country.

Automation, in general, is something South Korea has always encouraged, with the government providing tax breaks to companies which use advanced technologies.

How things would work when the entire North Korean economy is centralised and in the absolute control of the government is not yet clear, but certainly there’s a lot of infrastructure projects that are likely to be long overdue – well before the type of beachfront properties Trump was imagining.

North Korea is said to have a strong mining sector, contributing around 34 per cent of the country’s GDP.

According to the World Atlas, this is how North Korea’s GDP breaks down.

From the above pie chart, it would appear that construction may be first on the list for investment and development – probably mostly because Trump is most enthusiastic about that and who knows anyway?

Things could go belly-up tomorrow and the North Koreans could go back to being reclusive and isolated.

But with recurring natural disasters destroying large parts of the agricultural sector, North Korea needs to restructure and stabilise its economy if it wants to look after its people.

Overall, 35 per cent of North Korean workers are employed in the agriculture sector, with 65 being employed in industry and services.

As is the case with just about every other sector, this is in stark contrast to the situation in South Korea, where agriculture accounts for far less than 3 per cent of the country’s GDP.