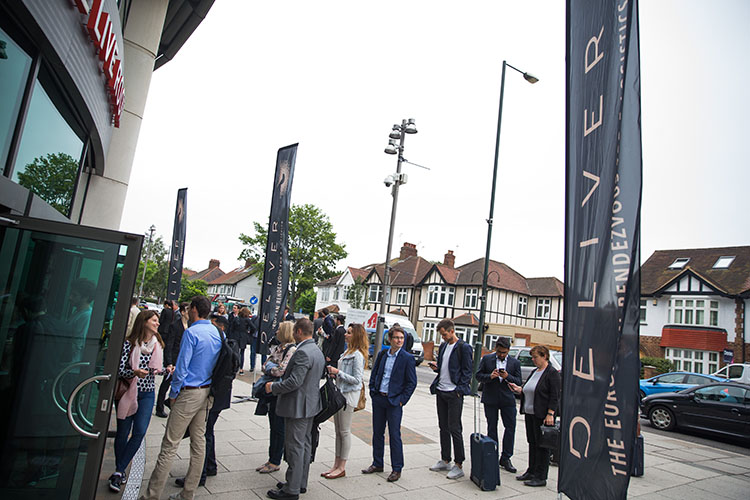 “Deliver” is a series of industry events in Europe aimed at “e-logistics”, an obvious play on the term “e-commerce”.

E-commerce can, obviously, refer to either online retail or wholesale, or any sales and purchasing activity that occurs in an electronic environment, on electronic devices.

And, in the aggregate, e-commerce is such a big activity now that it is driving growth in many related business sectors such as supply chain and logistics. Hence, e-logistics.

Deliver has been organising these e-logistics events for the past three years in many locations around Europe, and I attended the most recent one in Twickenham, on the outskirts of London, England.

The chosen venue was Twickenham Stadium, which is a famous sports venue, generally used for rugby, which is supposed to have evolved from football, but is so unlike football that it’s difficult to see any resemblance.

In rugby, you use your hands to pick up and carry the ball, something that would get you sent off the pitch in European football, or “soccer” as it is called in the US.

But at least this relatively popular sport, with its distinct rules, has its own name – rugby – in the UK. In the US, “football” generally means another game where the ball is handled rather than played with the feet, and so it is in Australia.

And while understanding new technologies well enough to write about them can be laborious sometimes, it is as nothing compared to the bewildering goings-on in Australian rules football or American football, or even rugby – the only thing I’m sure of is that the ultimate objective is to carry the ball to your opponent’s end zone or kick it through the upright sticks.

But even if that general rule flummoxes you, you can enjoy the traditional dancing (pictured above) whenever a nation with a Maori team play.

Also, someone observed that these games are good practice for picking up boxes and taking them from A to B and putting them down again, although very few people – if anyone – would think of them like that.

The rapid growth of e-logistics

The Deliver event was attended by several hundred executives from the e-commerce and e-logistics sectors.

“E-logistics” could be said to refer to the part of the logistics and supply chain sector that is directly affected by e-commerce.

While all business operations accelerate over time, the step-change that has been brought about by the massive growth of e-commerce is quite dramatic.

Online shopping has been around for a decade but it’s only in the last couple of years that it has begun to translate into big investments to change the way warehouses are operated and supply chain are managed.

Supply chain generally refers to the point in the operation where suppliers and their goods are processed through a facility such as a warehouse.

In the past couple of years, executives responsible for the efficient management of their company’s supply chain have noted that the momentum of e-commerce business has grown strong enough to make companies rethink the way they manage warehouses, supply chains and logistics.

Now, not only is e-commerce big enough and imposing enough to prompt a re-evaluation of supply chain operations, new technologies are available which promise to make operations within warehouses much more efficient.

These technologies are, obviously, products of the robotics and automation sector.

But the business of moving boxes is not as straightforward as one might think – the whole area of supply chain, which includes material handling, is filled with technical challenges.

And not only are roboticists and automation experts attempting to develop systems that can be applied somewhere in the supply chain, the executives responsible are still trying to figure out how to apply them in their own operations the technologies that are already profitably applied in many others.

Take, for example, the mobile robotic platform supplied by startup company Geek Plus. It can move boxes and entire shelf units around a warehouse or a similar facility all day.

This is obviously potentially useful, but how is it specifically useful to a specific business?

“That’s the important question we work with customers to answer,” Lit Fung, head of international business at Geek Plus, told me at the event. “Also, we make calculations about how many weeks or months it will take to see a return on investment.”

Fung gave a speech and was part of a panel discussion entitled “Warehouse Robotization and Fulfillment Automation” (pictured below). Fellow panellists were Yaro Tenzer, co-founder of RightHand Robotics, and Frederik Brantner, CEO of Magazino.

The hall was packed with hundreds of people, with some having to stand, indicating the high level of interest in the new technology gradually taking over from humans in the warehouse.

Many well-known names in e-commerce – such as grocery store chain Carrefour, clothes retail chain Next, and office supplies company Lyreco – were among those clamouring to find out more about how robotics and automation can help them in their operations.

Stéphane Platel, who is in charge of warehouse operations for Carrefour’s OOShop business unit, told me he was evaluating robotic solutions for a very specific part of the order-picking process.

“After we develop and apply the automation system at our facility, I think it may be implemented in other Carrefour warehouses around the world,” Platel told me.

Not as easy as it looks

Automated guided vehicles and autonomous mobile platforms like the ones offered by Geek Plus have already been proven to have dramatic effects on operations.

The Geek Plus robot is similar to the one used by Amazon, which has built a multibillion-dollar logistics business on the back of it.

But in other areas, such as item or material handling, getting a robotic arm to pick out a variety of different objects from a wide range of totes or baskets and place them in bags to prepare an order for home delivery is not as easy as it sounds.

A human can look at a box full of goods – no matter how many different products it contains – and pick out exactly the item required, and then put that item in a bag. All very straightforward for a human, but not an easy task for a robot.

However, Vanderlande, a company which supplies warehouse automation systems such as conveyors, is developing a robotic system which is looking to do what that human can do in that job.

Some may complain about yet another job being lost to a robot, but really, who wants to stand in one place all day picking and placing items as they move along? It’s one of those so-called 3D – “dull, dirty and dangerous” – jobs that robotics and automation technology is supposed to save us from.

An executive from Vanderlande told me that the company is working with a number of startups, including Smart Robotics, on developing a robotic arm and end-effectors that can pick and place items within a warehouse context.

Although she gave very few details, she did say the system has already been built and is being tested now. Some of the software and other components for the system are being developed in-house, but mostly Vanderlande is acting as the integrator for the solution.

Without knowing the details, it’s easy to say this sounds like the system being offered by RightHand Robotics and a number of other companies.

But the complexity involved in that one small space is such that it will be some time before a robot can effectively take over that job from the human. But these are very early days for robotic pick-and-place technology.

The system supplied by AutoStore has been experiencing “significant commercial success in the past couple of years”, according to AutoStore’s business development manager, James Smith, who told me that this success comes after almost a decade of development and refinement.

To look at, the AutoStore system is quite dramatic – a cuboid beehive with mobile robots buzzing around at the top. It’s a good solution for warehouses that want to optimise the productive use of their space.

The AutoStore system is what is known as an “automated storage and retrieval system”, or ASRS. It’s good at moving boxes around, but as for dealing with the items inside those boxes and perhaps separating them into individual customer orders, that’s the pickers’ and packers’ job.

Let’s look at this from another angle

A company called CMC also provides a similar ASRS. But the CMC system stores and retrieves using a horizontal robotic component – from the side (picture above) – rather than a vertical one, as AutoStore’s does.

Steve Garbett, UK sales manager for CMC, said his company’s system was “scalable to any size required” – similar to AutoStore.

CMC also offers a solution to another problem in logistics. It’s one that some readers may be familiar with. It’s the one which results in you receiving a massive cardboard box containing that tiny item you ordered online.

More than 90 per cent of the space in the box is unused, perhaps filled with styrofoam peanuts or something else to occupy the void.

This is obviously a waste of space and money.

There are at least two companies currently offering solutions which may eventually significantly reduce or even eliminate this waste.

One is CMC and the other is NeoPost. Both these companies provide a machine which can take a flat piece of cardboard and make a box out of it to the exact dimensions required by a given product.

This has obvious implications for many areas of the supply chain and logistics process. If all boxes are 90 per cent empty, that means there are 10 trucks on the road when there only need be one.

And while autonomous trucks are probably decades away, DHL was in attendance at the Deliver event and the company is known to be looking at all sorts of options for roboticising its operation, including driverless trucks.

For example, in Germany, DHL delivery people have been testing an autonomous parcel-carrying vehicle which follows them around.

And within warehouses, DHL has been testing numerous robotics and automation systems – from autonomous vehicles to robotic arms.

The fundamental driver of all this innovation is the need for speed and efficiency.

The DHL executive I spoke to is based in Spain. When I asked what types of jobs bring in the most revenue in the Iberian region, he answered, “E-commerce, involving apparel retail.”

This means that one can imagine that each delivery would be relatively small compared to a wholesale order within the business-to-business sector, for example.

This, in turn, means that the amount of money made on each delivery is relatively small.

This, in turn, means that using robotics and automation to eliminate every inefficiency and make everything faster and more productive is pretty much an imperative for all concerned because not only is logistics often a low-profit-margin business, so too is e-commerce.

(All pictures used in this article were taken at the Deliver event in London and supplied by the organisers.)