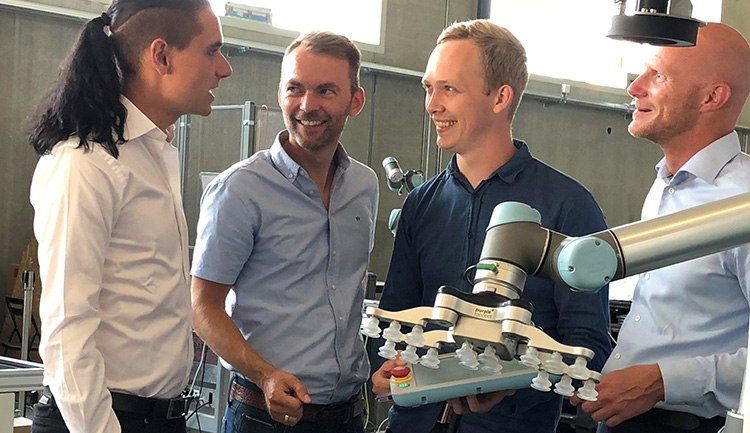 A team of experienced, former Universal Robots engineers have launched a new company called Purple Robotics and have established US distribution for what they claims is “the world’s first dual electrical vacuum gripper”.

The “innovative PR10 collaborative gripper” needs no external air supply and can be installed in less than 30 minutes, says the company, adding that the dual gripper can cut production time up to 50 percent.

With its double-grip function, the PR10 can handle several items in a single operation, enabling small and mid-sized businesses to reduce production time by up to 50 percent.

Unlike traditional vacuum grippers, the PR10 requires no external air supply so there are no cumbersome air hoses to manage and the gripper works independently of changes in the pressure, cleanliness and availability of external air.

The gripper can be installed in less than 30 minutes with no prior training, which dramatically reduces both the cost of implementation and changeover time between production lines.

With round edges and easy implementation, the PR10 is designed for safe, collaborative implementation alongside human workers, using any of Universal Robots (UR) three models. The PR10 is ideal for a wide range of applications, including pick-and-place, machine tending and palletizing.

Lasse Kieffer, CEO and founder of Purple Robotics, says: “Our experience with Universal Robots clarified that the market needed a new generation of robotic vacuum applications.

“We are entering a market with sky-high growth rates, and we have the development and distribution experience to match our aggressive goals.”

The global market for collaborative robots, or cobots, is estimated to reach $3.3 billion by 2020, with annual growth rates of more than 50 percent, according to Qyresearch Publishing.

The PR10 gripper has the potential to be applied to the majority of cobot applications.

The PR10 combined with a robot arm is especially attractive for small and mid-sized companies whose competitiveness depends on their ability to change over and deliver quickly, without requiring extensive robotics expertise.

Purple Robotics has already signed two US distributors – Olympus Controls and Thinkbot Solutions – and expects to shortly add nearly half a dozen more, resulting in coast-to-coast distribution and support in the US.

Nick Armenta, automation engineer at Olympus Controls, says: “The PR10 is a one-size-fits-all solution that eliminates the barrier to entry that is typically caused by customers’ unfamiliarity with pneumatics.

“Existing vacuum systems require custom design and usually at least five different parts, sometimes from different sources. A single package that can be bought off-the-shelf and quickly deployed without any engineering is a huge benefit for our customers.”

Philip Courtois, owner of Thinkbot Solutions, says, “There simply hasn’t been a vacuum gripper available that matches the ease, flexibility and functionality of the Purple Robotics PR10.

“I believe the PR10 will become the default choice for customers wanting a flexible vacuum solution for their UR robot, and it’s reassuring to them that the team behind Purple Robotics bring extensive experience from Universal Robots.”

Purple Robotics has already entered into a partnership agreement with the founders’ former employer, Universal Robots, and has just been included in the UR+ global online distribution channel for pre-certified robotics accessories.

In this partnership, Purple Robotics joins more than 77 industry-leading developers of robotics software, accessories, and end-of-arm tooling, who – after being screened and accepted – share this “important sales channel” with Universal Robots.

Anders Bo Rasmussen, senior product manager for UR+ at Universal Robots, says: “With Purple Robotics’ innovative double-gripper, Universal Robots strengthens the range of ground-breaking accessories offered to customers and potential customers across the world – while increasing the market potential of our robot arms. It’s a win-win.”

To drive the launch and build a strong global distribution network, Purple Robotics has hired Kenneth Henriksen, an established name in the industry, as its new chief commercial officer.

Henriksen brings to Purple Robotics an extensive engineering background and experience in technical sales and sales management, most recently with robotics company On Robot.