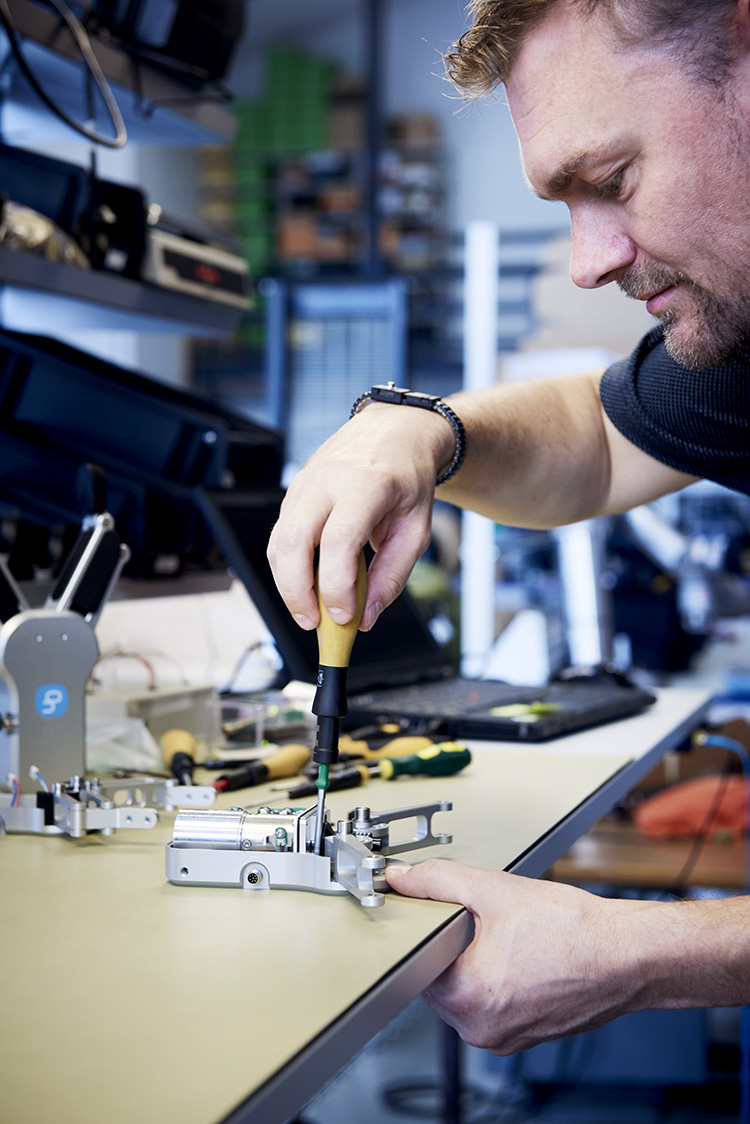 OnRobot’s headquarters will be located in Denmark under the management of Iversen, and the three entities will continue their individual operations and development as well.

In addition, OnRobot’s global network of distributors will have access to local sales support, technical assistance and product training from the company’s regional offices in Germany, China, US, Malaysia, and Hungary.

The company says there are more offices to come in 2018.

Iversen (pictured above right) says: “The aim is to build a world-leading organisation in development and production of end-of-arm tooling. Through further acquisitions and collaborations, we expect to reach a revenue exceeding one hundred million dollars in a few years.

“Safe, cost-effective, and versatile cobots are becoming increasingly common because they offer sophisticated and intuitive programming that enables them to be easily deployed and redeployed. Easy-to-integrate end-of-arm tooling, such as grippers and sensors, become vital elements in adapting these powerful automation tools for a wide range of applications.”

With their new venture, the two investors now say they are further strengthening Denmark’s global position in the robotics field.

Christian Motzfeldt, CEO of the Danish Growth Fund, says: “In recent years Denmark has successfully established itself as a global hub for robotic technologies.

“Universal Robots was a pioneer, and since then many more strong and innovative companies have been formed with roots in Odense, Denmark.

“The new OnRobot has the potential to become not only a world-leading company, but also a catalyst for further development of the Danish robotics cluster.

“We are pleased to promote this trend through our investments and invite both companies and investors from around the world to come join us.”

Collaborative robots, which work safely alongside humans in applications such as packaging, quality testing, material handling, machine tending, assembly and welding, currently represent 3 per cent of global robot sales, according to the International Federation of Robotics, but the share is expected to rise to 34 per cent of a $25 billion market by 2025.

Iversen says: “This growth will most definitely depend on cobots being used in more applications.

“Their small footprint and ability to work safely alongside humans make them ideal for small and medium-sized manufacturers who need to compete globally.

“Cobots are also increasingly integrated into very large manufacturers such as automotive plants, where they are taking over processes that can’t be automated using traditional robotics.

“As the types of cobot applications expand, so does the need for new tooling that can be quickly and easily integrated into the cobot’s user interface. The new OnRobot is championing a current mega-trend in the field of automation.

“Combining the unique capabilities of these end-of-arm technologies under one umbrella company that is led by some of the smartest minds in the robotics industry will make them even easier to implement and program. By the way, the new OnRobot is currently looking to add employees in R&D.”

The three companies that will form the new OnRobot were chosen because of their “synergistic” end-of-arm technologies, the ability of these technologies to easily integrate to provide improved support and the long-term vision and capabilities of each company’s founders.

On Robot, founded in 2015, provides plug-and-play electric grippers — RG2 and RG6 — that mount directly on the robot arm, are highly flexible and are simple enough to be programmed and operated from the same interface as the robot without the need of engineers.

OptoForce, founded in 2012, provides force/torque sensors that bring the sense of touch to industrial robots so that they can automate tasks that would otherwise require the dexterity of the human hand.

Perception Robotics, founded in 2012 and based in Los Angeles, develops bio-inspired robot grippers:

1) a gecko-inspired gripper for handling large, flat objects and

2) a tactile gripper with compliant rubber tactile sensors to give robots a sense of touch. Its first grippers will be available this year.

At the Automatica trade show in June, OnRobot will introduce the first fully integrated products with combined user interfaces that simplify both the development and use of the cobots.