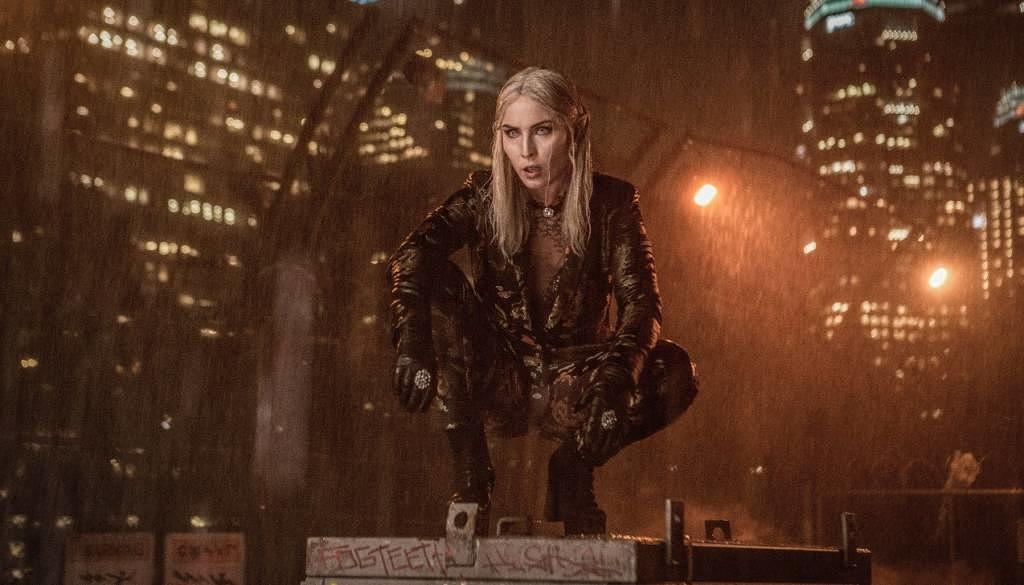 Many years ago, there was an animated film called A Bug’s Life which made the line “Don’t look at the light” famous. It was uttered by some sort of flying insect as a warning to a fellow flying insect who was gravitating towards a lamp which would inevitably harm it. The line was mainly funny because of the response, which was: “I can’t help it.”

This exchange could be said to be at the heart of the film Bright, which was released towards the end of last year and stars Will Smith as a cop in some sort of futuristic nightmare world called Los Angeles, which is full of street gangs and what look like genetically modified humanoids called Orcs and Elves.

Oh, that’s what Los Angeles looks like now? I see. As with many films like this, “futuristic” is either a relative or irrelevant term.

Smith’s rookie cop partner, played by Joel Edgerton, is an Orc who has had to make numerous compromises in order to join the force. His fellow officers pick on him and want him kicked out and his own Orc community despise him.

Ostensibly, this is a tale about prejudice and the struggle to find a place in a diverse society. Everyone faces it to some extent in real life, although some may have more trouble than others.

Edgerton’s Orc cop is the first of his community to join the police force and Smith resents being the one who is partnered with him because he’s the one taking the flak for accepting him.

Anyway, as much as I think it’s an interesting way to deal with the prejudice issue, what I found more interesting was the idea of these weird humanoids and other creatures living in the same world as humans.

As well as Orcs and Elves there were Centaurs and Dwarves.

All of these creatures inhabited a world where magic was commonplace and the most prized possession was a magic wand.

The wand has special powers – the bearer can do anything from conjure up millions of dollars to bringing someone back to life.

However, touching a wand can be dangerous for anyone who is not a “Bright”, which is a type of person who has a special unknown quality that only touching the wand can reveal.

If you touch the wand and spontaneously combust into a million pieces, that means you’re not a Bright.

Quite simple, but maybe some people would rather not know the truth about themselves – at least when it comes to finding out whether they are a Bright or not.

The wand at the centre of the film causes all kinds of gangs and groups to fight for its control. And although I’m not normally drawn to favouring baddies, I found Noomi Rapace’s performance compelling. She certainly looks different from what she did in The Girl With a Dragon Tattoo.

The quality of the production was impressive. It’s something worth commenting on because in today’s online world, companies like Netflix are positioning themselves as film and television production studios.

This is the second Netflix film I have seen which I found I really liked because it was well made. The other one was The Discovery, which starred Robert Redford and was about reading people’s minds and seeing where their thoughts go after they die.

Production values are an important issue in an environment where so many films that are released are just absolutely rubbish just to look at and to listen to. Maybe there’s a good story in there somewhere, but they make it too painful to enjoy it.

The best story within Bright, in my opinion, was the diversity of life. I wanted to know where these creatures – Orcs, Elves, Centaurs and Dwarves – came from.

Was there a mad scientist who created those apparent human-animal hybrids in a lab? Or was it that the fallout of a nuclear war or something mutated the human population’s genes?

The human-animal hybrid created in a lab option is the most realistic, given that there is so much scientific work going on these fields – and has been for many years – in the real world.

Films like this cannot provide us with all the answers, but I think they have the opportunity to provide some of them. Or at least give us some ideas, even if those ideas are simply questions we could ask of the people behind the scenes who – according to some – have been experimenting with human genes for literally thousands of years.

But then, maybe I want too many films to be about the same questions and things. The Titan provided a different perspective, and it’s impossible to deal with everything in one film.

Bright could have been disappointing because it seemed to completely avoid any of those important questions, but maybe some things were too disturbing to get into in a film like this – it’s not a horror film.

Smith has made a career out of being likeable, and with the support of the rest of the cast as well as the technical crew behind the cameras, he has again given us a watchable, enjoyable film.

Like I, Robot, Smith and co don’t even begin to delve any deeper than the surface, but they do provide a fairly polished mirror in which we can see some things we like a little bit maybe, and other things we might need to work on.

I feel I should not be drawn to the light of what is essentially a whiz-bang action film, but I just can’t help it.

To be fair, as an action film, it’s pretty good.