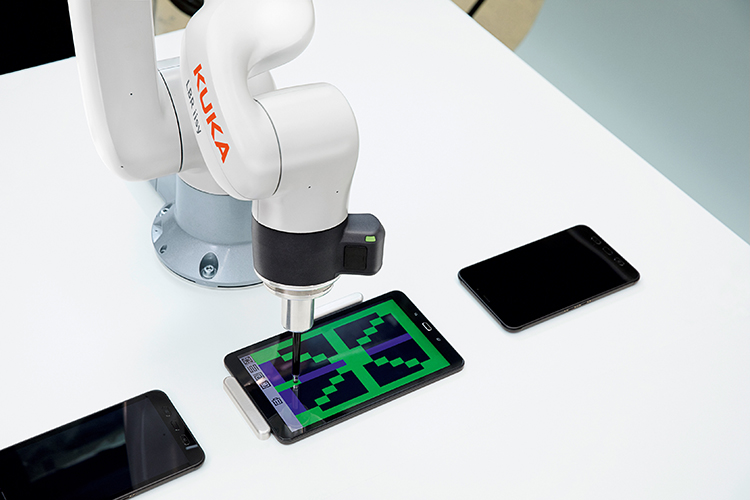 Kuka demonstrated some of its concepts for the production of tomorrow at the recent Hannover Messe event, under the motto “industrial intelligence 4.0_beyond automation”.

Visitors were shown how Kuka merges the worlds of mechatronics and digitization.

Digitalization has become critically important in the operation of the modern industrial company.

Ease of use, quick commissioning and networking: these are the topics that are increasingly shaping the mechanical engineering sector.

Kuka says it is addressing these requirements by presenting its developed Smart Factory, which combines mechatronic components and digital solutions.

Kuka regards itself as an innovation leader and driver of Industrie 4.0, and has been devloping robots and systems which are consistent with its intelligent automation concept.

With the Kuka LBR iisy (main picture and below), which celebrated its world premiere at the Hannover Messe, Kuka is expanding its product portfolio with a sensitive robot for human-robot collaboration without any safety fence.

They demand solutions that are more user-friendly. They want the robot applications and cobots to assist people with production and quality assurance.

They also want autonomous, mobile robots which can supply the production robots with components, ensuring their continuous workload.

Modular software platforms for warehouse management control the effective use of the mobile assistants that communicate with each other.

Kuka says it is realizing such scenarios through its range of technologies.

As well as the robots, the Kuka Connect software integrates all the mechatronic components and the various application-specific digital platforms.

With Kuka Connect, it is also possible to access all machine information and the status of production at any time, says the company.

The Smart Factory produces – of course – a robot even though only in model format, but with special engraving as automation specialist Kuka is celebrating its birthday this year: in its 120th anniversary year, visitors to its Hannover Messe booth were given an individually engraved anniversary robot.

Everything easy with LBR iisy

At Hannover Messe 2018, Kuka showcased the prototype of the LBR iisy and extends its portfolio of human-robot-collaboration to include the low payload range.

As a result, Kuka claims it has become the first manufacturer to cover the entire range from cobots to mobile robotics, intuitive operation and industrial heavy duty robots.

The LBR iisy can be quickly adapted to new requirements and is suitable for many new applications.

The focus of this innovation is on ease of use – which is also reflected in the name.

The LBR iisy is intended for users who have process knowledge, but do not necessarily have programming skills.

A robot for the living room

In what is a new area for Kuka, the company is also working on universal solutions in the field of consumer robotics.

The company’s own robotics and automation expertise is being supplemented with the know-how of partners and service providers.

With the “i-do” concept study Kuka is presenting at Hannover Messe the first consumer robotics prototype in its history.

The concept behind “i-do” is a mobile, modular system that end customers can compile according to their own requirements.

Kuka supplies the platform and the framework and the customer determines which Kuka feature or partner feature he wants to purchase.

Augmented reality and products for the IIoT market

The Kuka subsidiary connyun is one of the first companies to introduce two standard products for the industrial internet of things market.

With the I4_suite, connyun promises standard products under the aspects “Integrated-Intelligence-Industrial-IoT”, which production operators can use quickly and offer them significant advantages regarding availability of machines and stations.

For the first time, Device Insight will be showcasing application possibilities of augmented reality using smart glasses and tablets.

The new service will connect technicians on site with remote specialists and combines system data from the IoT platform and local live recordings.