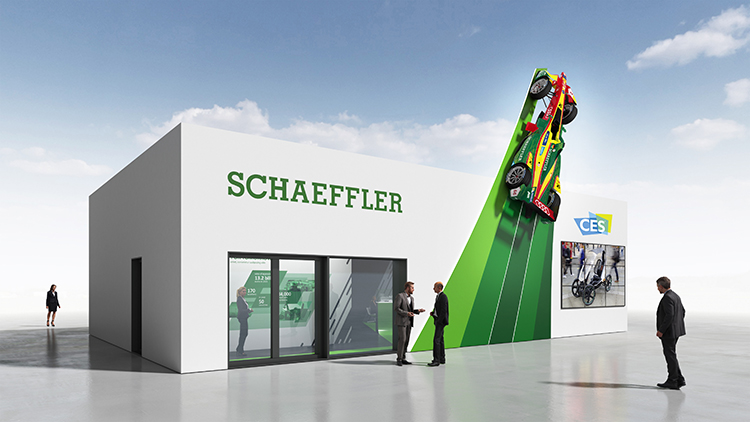 Global automotive and industrial supplier Schaeffler has announced its quarterly results for the first three months of 2018.

As a result of the organizational realignment initiated last year, this is the first time the company is also reporting on the performance of its three divisions:

Compared to global automobile production, which declined by 0.7 percent over the same period, the Automotive OEM division grew significantly above market, outperforming it by approximately 4 percent.

All four of the Automotive OEM division’s business divisions contributed to this growth, including the newly reported “E-Mobility” business division, which expanded its revenue by 6.6 percent at constant currency in the first quarter.

At 12.4 percent, the constant currency growth rate was particularly high in the Greater China region, followed by 3.7 percent in the Americas region, while both Asia/Pacific and Europe generated only slight growth of approximately 0.5 percent.

Based on this performance, the Automotive OEM division generated EBIT before special items of 217 million euros (prior year: 275 million euros).

The division’s EBIT margin before special items for the first three months amounted to 9.5 percent (prior year: 11.9 percent).

Reasons for the decrease include launching costs incurred for the ramp-ups in the second half of the year as well as rising development expenses and other expenses to accelerate implementation of the “E-Mobility” initiative that is part of the company’s program for the future, the “Agenda 4 plus One”.

Based on an increasing number of product launches in the second half of the year, the Automotive OEM division continues to expect to generate revenue growth of 6 to 7 percent at constant currency and an EBIT margin of between 9.5 and 10.5 percent before special items for the full year 2018.

The slight decrease is primarily due to lower revenue in the Europe region as well as in the Americas region. Benefits of playing online casino in Canada here.

Good headway was made in developing the Greater China region where revenue grew by 40.9 percent at constant currency in the first quarter as a result of higher Original Equipment customers’ requirements.

At 16.1 percent, the Asia/Pacific region reported a considerable increase in revenue at constant currency as well, largely due to growth in the Independent Aftermarket (IAM) in the Southeast Asia subregion.

The resulting EBIT margin before special items of 17.9 percent (prior year: 19.2 percent) slightly exceeded the guidance for the full year.

The decrease compared to the prior year is mainly due to the one-off business in the first quarter of 2017 described above.

The group expects the Automotive Aftermarket division to generate revenue growth of 3 to 4 percent at constant currency and an EBIT margin before special items of 16.5 to 17.5 percent for the full year.

The Industrial division expanded its revenue to 826 million euros in the first quarter (prior year: 782 million euros), representing a growth rate of 10.8 percent at constant currency.

This means the Industrial division has grown considerably more rapidly – for reasons related to the market – than expected.

The increase was primarily driven by the Industrial Distribution unit which raised its revenue by 12.4 percent at constant currency.

This improvement was buoyed especially by considerably higher demand and improvements to the functional cost structure from the “CORE” initiative under the company’s program for the future, the “Agenda 4 plus One”.

For the Industrial division as well, the group confirms its target for 2018 of increasing revenue by between 3 and 4 percent at constant currency and generating an EBIT margin before special items of 9 to 10 percent in 2018.

The Schaeffler Group generated free cash flow of minus 71 million euros in the first quarter of 2018 (prior year: minus 130 million euros).

At the same time, the Schaeffler Group’s financing situation has improved further. Despite slightly higher net financial debt, the gearing ratio, that is the ratio of net financial debt to shareholders’ equity, improved to approximately 89 percent (end of previous year: 93 percent).

As most recently described at Schaeffler AG’s annual general meeting on April 20, 2018, the 20 initiatives comprising the company’s program for the future, the “Agenda 4 plus One”, are being executed consistently and energetically. Nearly all initiatives made progress.